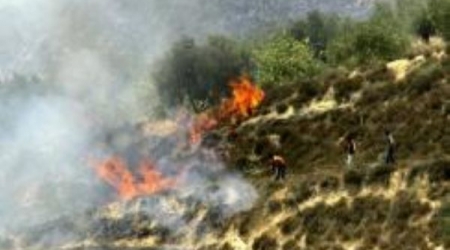 A Palestinian Bedouin tent was set ablaze in the occupied West Bank, near Ramallah city, on Thursday. Extremist Jewish settlers are under suspicion for the attack.Local sources reported that the tent is owned by the Palestinian family of Yousef al-Qa’abnah, in Ayan Samia area.

No injuries were reported by Al Ray, as the family was not in the tent at the accident time.

The Hebrew words for ‘revenge’ and ‘administrative’, possibly referring to the recent administrative detention of right-wing extremist Meir Ettinger, was spray-painted on a nearby stone.

Palestinian source also reported that the Popular Resistance Committee stopped an attack by settlers in Awarta, near Nablus. The settlers fled once they saw that they were discovered.

Two weeks ago, a house belonging to the Dawabshas of Douma village, near Nablus, was set ablaze, killing a toddler, his father and seriously injuring the mother and another son.