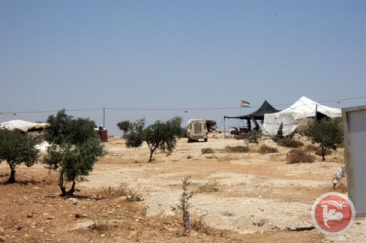 Israeli forces opened fire at Palestinian and foreign activists on Friday during a memorial in the village of Susiya south of Hebron for 18-month-old Ali Dawabsha who was killed in an arson attack by Israeli settlers on July 30, a spokesperson from the Popular Struggle Coordination Committee said.No injuries were reported.

During the memorial, activists and local children were flying kites above a nearby illegal Israeli settlement when Israeli soldiers in the area responded with opening fire at the kite flyers, a PSCC spokesperson told Ma’an News Agency.

Organizers said the memorial signified that the arson attack on the 18-month-old was just one piece of a series of crimes committed by the state of Israel and Israeli settlers across the Palestine territory.

Activities went on until late in the evening, as night-guard committees provided protection for residents and activists.

Head of PSCC Munther Amireh, said that the organized activities came under the committee’s local and international campaign to support the resistance of villagers in Susiya against Israel and settlements.

Last month Israeli authorities ordered the demolition of around half of the homes in Susiya, sparking international outrage.

The court case has been ongoing since 2012, when residents of Susiya applied for the Israeli Civil Administration to approve an outline plan for northern part of the village.

Susiya villagers reportedly built homes in 1986 on agricultural land they owned, after being evicted by Israel from their previous dwellings on land declared as an archaeological site.

Situated in Area C, an area covering 60 percent of the West Bank which is under full Israeli control, villagers of Susiya must apply for construction permits from the Israeli Civil Administration.

In practice only a handful of Palestinian applications for construction or expansion on existing structures are approved, with only six percent of Palestinian building permit requests granted by Israel between 2000 and 2012.

Unable to get ‘legal’ permission, Palestinians are faced with either leaving or building illegally.
Israel currently refuses to recognize 35 Bedouin villages in the Negev, which collectively house nearly 90,000 people.