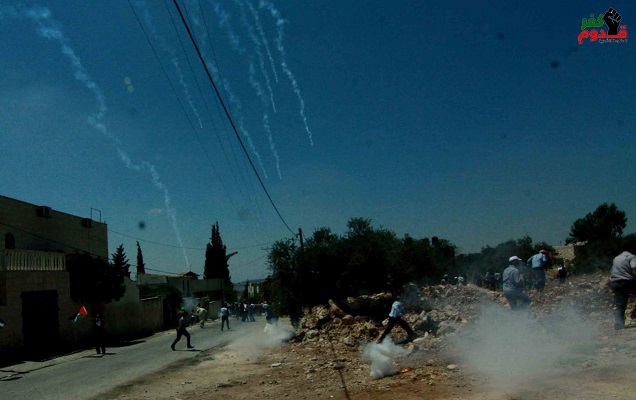 Israeli soldiers attacked, Friday, the weekly protest against the Israeli Apartheid Wall, colonies and the closure of the main road for the thirteenth consecutive year, in Kufur Qaddoum, near the northern West Bank city of Qalqilia.Israel closed the road 13 years ago, to enable Jewish-only traffic to the Kedumim illegal colony.

Coordinator of the Popular Committee against the Wall and Settlements Morad Eshteiwy said the soldiers were extensively deployed in the area, and attacked the protesters within minutes after protest started.

He added that the army fired gas bombs, rounds of live ammunition, and rubber-coated metal bullets, causing many locals, including children, and international peace activists, to suffer the effects of tear gas inhalation.

The army also sprayed several homes in the village with wastewater mixed with chemicals.

Hundreds marched while chanting against the Israeli occupation, ongoing crimes and violations, and carried flags, signs and posters of the slain Palestinian baby Ali, 18-month of age, and his father Sa’ad Dawabsha, who died after the terrorist Israeli attack on their home in Douma Palestinian village.

They also called for national unity, escalating the popular struggle against the illegal Israeli occupation and its colonies, and for the protection of the Palestinian people, especially the children.

It is worth mentioning that the soldiers surrounded the village since morning hours, Friday, and installed a roadblock before declaring it a closed military zone.