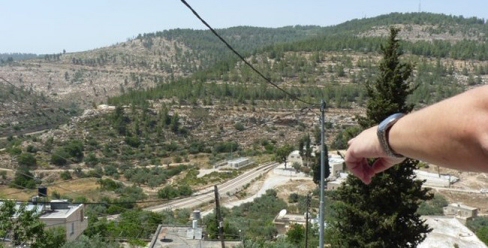 Israeli occupation forces, on Monday morning, have invaded Beit Jala town, northwest of Bethlehem, using bulldozers, to proceed with building a new section of the apartheid wall.The razing is taking place in Bir ‘Ona archaeological site, and the wall will split the Cremisan Monastery valley in half.

According to the PNN, Israel’s Supreme Court, in July, issued a decision giving the occupation army the green light to proceed with building the separation wall in the valley.

The army will begin building the wall on family lands in Beit Jala, leaving just a small piece undeveloped at the current time along the edges of the monastery’s lands.

This decision came after the Israeli Ministry, in May, notified all concerned parties of its intention to begin building the eastern section of the wall on the lands of Beit Jala families. The Ministry of Defense alleged that the Supreme Court’s decision would make sure that the wall was to be built on unclaimed lands and that it would not separate the monastery from its lands and sheep.

Following this notification in July, lawyer Gheyath Nasser and his clients from Beit Jala families submitted an appeal to the Israeli Supreme Court to prevent this decision from being adopted, demanding that they reinstate their previous resolution to bar the building of a new section of wall in Cremisan valley. Yves Saint Foundation and the other parties joined together to support Nasser’s appeal, however the Court took the same position as the Ministry of Defense and rejected the appeal. The Court indicated that the main point was that the wall would leave the areas surrounding the monastery untouched.

The Israeli Supreme Court had in May issued a resolution rejecting the proposed path of the wall in Cremisan valley, due to concerns for the huge impact on the residents’ lives. It demanded that the Ministry of Defense make adjustments to the proposal in order to minimize that impact, stressing that the most important thing was to protect the monastery and its lands, as well as preserve territorial contiguity between the monastery and the residents of the surrounding areas.

Saint Yves Foundation condemned the Supreme Court’s decision to give the green light to the army and Ministry of Defense to build the wall, saying that the decision would lead to Palestinian loss of land and livelihood, and have a long and severe effect on the population’s quality of life despite the amendments made by the Ministry of Defense.

Gheyth Nasser clarified that the Supreme Court’s decision would not end his clients’ appeals in the legal struggle of this cause. He said that if the Court would not reinstate its previous decision in a final manner, his clients would be badly affected by the proposed route of the wall.

Although the Israeli army insists on building the wall, it is the citizens’ right to appeal again to the Court in order to assert their claim. Nasser stressed that they will appeal again in the coming days to the Supreme Court, and will demand that the Court listen to the citizens’ concerns as well as those of the Ministry of Defense.