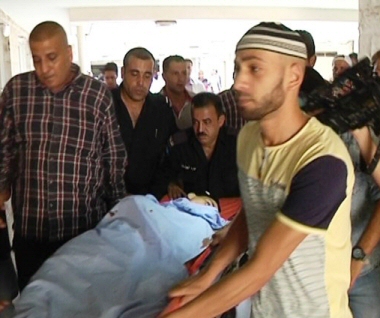 Israeli soldiers, on Monday, shot dead a Palestinian at Za’tara military checkpoint to the south of Nablus, according to the Red Cross.

According to WAFA correspondence, Red Crescent said that the soldiers shot 26-year-old Mohammed Bassam al-Atrash for allegedly attempting to stab an Israeli soldier. Israeli forces reportedly denied medical teams access to him, leaving him to bleed to death.

Al-Atrash was from the Jenin town of Kufr Ra’i.

Furthermore, on August 9, 20-year-old Anas Taha from Qotna to the northwest of Jerusalem, was shot dead by Israeli soldiers near Ofer prison, west of Ramallah, also for reportedly stabbing an Israeli settler.

The Palestinian government, in a statement, denounced the far from truth flimsy excuses used by the Israeli side to justify the killing of al-Atrash, stressing that the Israeli occupation is responsible for all crimes committed against the Palestinian people.

According to al-Haq human rights center, “Between 20 and 28 April 2015, Israeli Occupying Forces (IOF) killed three Palestinians, including a child, in the West Bank cities of Hebron, East Jerusalem, and Jenin.”

“These cases are emblematic of Israel’s disregard for Palestinian lives and policy of lethal use of force,” added the center.

“Israeli forces should refrain from using live ammunition against civilians and resort to less lethal methods,” urged the center.

As an Occupying Power, Israel is obliged to protect the occupied population and safeguard their lives.

On Sunday, The Palestinian foreign ministry, in a statement, said that a file on Israel’s policy of field execution committed against the Palestinian people is being prepared in preparation to take it to the international Criminal Court (ICC) in Hague.

According to the Middle East Monitor “At least 23 Palestinians have been killed and another 2,156 detained by the Israeli military since January 1, 2015, the Palestine Liberation Organization (PLO) said in a report.

The report noted that the Israeli army killed at least 42 Palestinians in the same period of 2014.