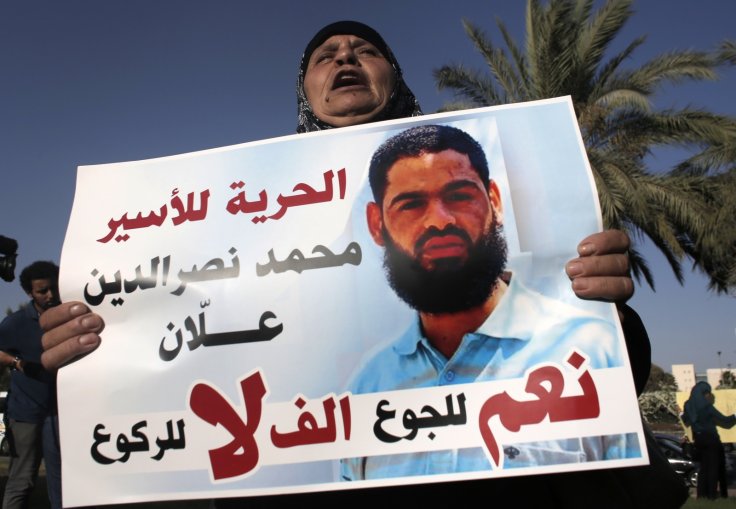 Palestinian lawyer/political prisoner Mohammed ‘Allan entered his 64th day of hunger strike Tuesday after waking from a four-day coma, and pledged to continue the open-ended strike until death if necessary. 250 Palestinians who are being held without charges by Israeli authorities in a prison camp in the Negev desert have decided to join the open-ended hunger strike.
The prisoners join ‘Allan in demanding an end to the Israeli practice of administrative detention, in which Palestinian prisoners are held indefinitely without charges or trial, in direct violation of international law and the Fourth Geneva Convention.

‘Allan, a 31-year old Palestinian lawyer, slipped into a coma four days ago, and Israeli authorities administered vitamins and fluids intravenously. Upon awaking from his coma on Tuesday, ‘Allan pledged to continue his hunger strike. He was then joined by an additional 250 prisoners, who have all pledged to engage in an open-ended hunger strike until their demands are met.

The hunger strikers are demanding an end to the Israeli practice of administrative detention, in which Palestinians are held without charges in harsh conditions, with no access to legal counsel, and often denied family visitation as well.

According to the prisoners’ representative, who spoke with reporters from Ma’an News Agency, the practice of administrative detention is used by Israeli authorities ‘to coerce the Palestinians and deprive them of their life.’

The deteriorating condition of ‘Allan has sparked rallies across the West Bank voicing support for his demands, and has led to dozens of other prisoners deciding to hunger strike as well. His mother has also joined the hunger strike, and is holding a vigil outside the prison hospital where ‘Allan is being held.

The 250 prisoners who joined the hunger strike on Tuesday represent all of the prisoners who are being held without charges in the Negev camp.

The camp also houses around 1500 prisoners who have been charged with crimes – although many of these prisoners argue that the charges against them were fabricated and have no basis.

The movement of support for ‘Allan is similar to the support garnered by long-time hunger striker Khader Adnan, who was eventually released by Israel on July 12th after 54 days of hunger strike. This was Adnan’s second long-term hunger strike, and both occasions brought him near death.

On Monday, Israeli authorities said they would consider releasing ‘Allan into exile, preventing him from returning home to Palestine for at least four years. His legal team refused that idea, saying that he will continue his hunger strike until he and other prisoners held without charges are released, and Israel ends this illegal practice.

The Israeli government is currently pushing to have ‘Allan force-fed against his will, but Israeli medical personnel have refused to carry out the procedure. Forcefeeding is considered a form of torture under international law.