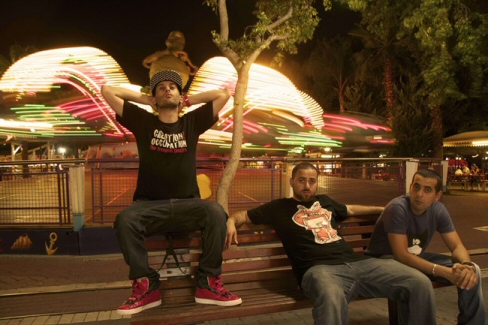 A Palestinian boy and a Jewish girl get stuck in the elevator. The girl changes her military uniform to civilian clothes, and the boy pays her a compliment: “Looks better on you, the green don’t suit you.” The girl responds: “Without the sniper lens, you look cute too.”This is the scene described in “Mama I fell in love with a Jew”, one of the most recent hits from Palestinian hip hop group DAM, who have spent the last year touring around Europe and the Middle East playing their album ‘Dabke on the Moon’, released in 2012.

“It’s getting great. People are jumping from the beginning (of the concert) to the end,” Tamer Nafar, one of the founding members of DAM, tells Ma’an just two days after the band’s tour in Turkey.
Established in 2000 by brothers Tamer and Suhell Nafar and their friend Mahmoud Jreri, DAM is the first Palestinian hip hop group and among the most successful in the Middle East.

Based in the town of Lod, or al-Lidd in Arabic, located southeast of Tel Aviv, the group rose to international fame after the release of their single “Min Irhabi” (Who’s the Terrorist) in 2001 during the Second Intifada.

“The views on YouTube are high, and I see a lot of comments in English,” he says.

From children’s rights to female empowerment

Over the years, DAM has been rapping about topics ranging from living conditions in their hometown to women’s rights, freedom, and the Arab revolutions in 2011. The sounds are a mixture of both Western and Arabic instruments.

“We have a more metaphoric approach to subjects now. Musically, we have become more open-minded and work with different producers,” Nafar says.

Many of DAM’s songs have also featured visiting artists. In “Mali Huriye” (I Don’t Have Freedom), for instance, a group of Palestinian children sing about how all other children in the world have freedom except them.

The lyrics of the song criticize patriarchy within Arab societies. In the music video, produced by award-winning Palestinian director, Scandar Copti, a woman refuses to iron her husband’s shirt and finally drives away from home.

The initial idea and funding came from the United Nations Population Fund.

“They wanted to do a campaign about women being independent and equal partners in the Arab society, and that is something we care about. So it was a win-win situation,” Nafar says.

As loud critiques of the Israeli government, guaranteeing sufficient funding has not always been easy for DAM. The group has financed some projects from their own pockets. Yet Nafar says that all members of the group make their living out of art.

This means sometimes focusing on their individual projects. While the band is still touring together, Jreri is now working on his music start-up, Suhell Nafar is making movies, and Daw is finishing her studies in music.

Not just a geographical talent

Tamer Nafar himself has been composing the soundtrack for a feature movie on Palestinian hip hop, due to be released next February. Being edited in New York, the movie is the biggest step so far towards a Western audience, Nafar says.

The rapper is still hoping for a different reception outside of the Arab world. Having released two albums and more than 87 singles, Nafar says he finds it frustrating that some people are more interested in the politics surrounding DAM than the music itself.

“It’s like our talent is geographical, that we came from the right place. But I would like to believe that we are the right people – that we would be having this interview even if I came from Norway,” he says.

Western journalists, especially, tend to view the group’s work only in the light of the Israeli-Palestinian conflict.

“I try to talk about our new album, and two minutes after they ask me about Hamas,” Nafar says. “But I don’t want to be a messenger – I just want to make music and document my life.”

Although many of DAM’s songs could be interpreted as political – “Ghareeb fi blady” (Stranger in my country), for example, accuses both the “democratic Zionist regime” and other Arab countries of neglecting the Palestinians – Nafar claims he does not want to pick sides.

“Palestine is not just one thing but has many layers to it,” he says. “I believe in ideas, not in groups.”
In practice, Nafar says his music could very well defend any community whose rights have been violated, be it observant Muslims or gay people.

Pulled back by politics

Instead of just politics, Nafar says the group’s inspiration for lyrics comes from everyday life. For him, refusing to fit into a predefined box is also a statement.

“About 90 percent of the songs are personal – about love, family, partying, and so on,” the artist says. “When you’re living in this place, everybody is expecting a message from you. But I refuse to be part of this patriotic theme.”

Yet he admits that living as a Palestinian in Israel makes it hard to stay apolitical. This is also what he writes about in one of his new, yet unreleased songs, titled “If Only”.

Yet, politics almost always pulls him back.

“I wish I could write a song about kissing under the rain. But I hate the rain because it reminds me of a leaking roof and how poorly I live. So instead of writing the song I start thinking of how me and my mother were putting plugs all over the ceiling to stop the drops.”

Although creating a new album for DAM is currently not on top of Nafar’s to-do list, he says the band has never thought of stopping. Once all the members have time again, they will sit down to plan new material.

Whether the new album will include love songs – or something completely different – will be decided together with the others.