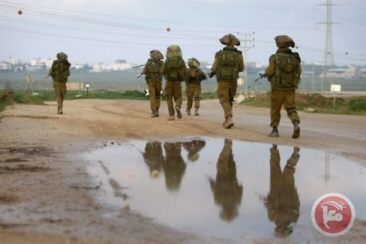 Israeli army forces raided, before dawn on Tuesday, the house of Mohammad Abu Amsha al-Atrash’s family, a Palestinian who was shot dead in cold blood by the Israeli army on Monday, according to his father.According to WAFA correspendence, Mohammad’s father, Bassam, said that an Israeli army force raided the house located in the town of Kafr Ra’i, southwest of Jenin, and interrogated him and other members of his family.

According to witnesses, an Israeli border officer physically assaulted Mohammad, who was present at the site, and in an extremely degrading manner. The young man, in return, aimed to push the policeman back, but the soldier shot Mohammad with two bullets in his feet. Another Border policeman, who was stationed at a close military tower, shot him with four bullets in the chest, killing him instantly.

The Israeli military and police claimed that Mohammad had attempted to stab the policeman with a knife, but visual evidence of the incident circulated on the internet and proved the inaccuracy of the Israeli army’s narrative.

Palestinian Authority security forces, on Tuesday, said that there was no evidence that Palestinians shot by Israeli forces in recent days, in two cases fatally, had actually stabbed Israeli soldiers.

Ma’an further reports that, in the past week, Israeli forces have shot three Palestinians, killing two, who they claimed attempted to stab Israeli soldiers or Border Police officers.

However, the spokesperson for the PA security forces, Major-General Adnan Dmeiri, said in a statement that Israel had provided no evidence to support its allegations.

He questioned the fact that in each case the Israeli army or police force investigated its own soldiers or officers, ‘without the interference of any other party.’

He said that the investigations had portrayed the Israeli soldiers and officers as ‘heroes.’
Dmeiri criticized the fact that the army and police force were both the investigators and the ‘executors’ of Palestinians.

Since the beginning of 2015 Israeli forces have injured an average of 37 Palestinians a week, and killed a total of at least 25 Palestinians, according to UN figures.