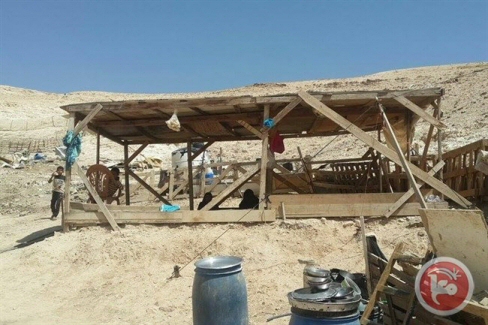 Israeli authorities, on Tuesday, demolished a number of residential tents in the village of Fasayel, in the southern Jordan Valley, according to local sources.Hamza Zubedat, a local activist, said that an Israeli army force accompanied by bulldozers demolished 12 residential tents, which shelter members of the Bedouin tribes Rashaydeh and Ta’amreh.

The Israeli army and police have repeatedly vandalized residencies in the Jordan valley under the pretext of construction without permission.

Israel heavily invests in transferring the Jordan Valley into a completely Israeli area, primarily in relation to agriculture, through banning territorial contiguity between a future Palestinian state and the rest of the Arab world.

B’Tselem estimated that from 2006 until 30 June 2015, Israel demolished at least 876 Palestinian residential units in the West Bank, not including East Jerusalem, causing 4,105 people – including at least 2,011 minors – to lose their homes.

Most Palestinians are forced to build without a permit to meet their families’ needs. In many cases, displacement is due to cumulative pressure created by a combination of factors, including settler violence, movement restrictions, including the Barrier, and restricted access to services and resources, said OCHA.