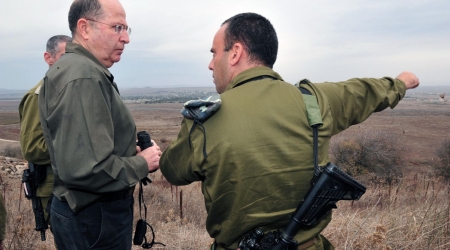 Israeli Minister of Defense Moshe Ya’alon, on Wednesday, reportedly gave clear instructions to his soldiers to shoot dead any Palestinian who tries to carry out an operation against Israelis.During a visit to the Israeli soldiers at Jordan valley, Ya’laon said, ‘This period [has] witnessed an increase in the number of self-motivated attacks against Israelis, and it is of aptitude not to become [an] easy target. In such case you have to directly attack him.’

‘The soldier has to stop him by attacking him directly,’ Ya’alon instructed, according to Al Ray Palestinian Media Agency.

He explained to the soldiers that the enemy concentrates on weak points and, for that, one must be ready for any accident, even in areas of calm.