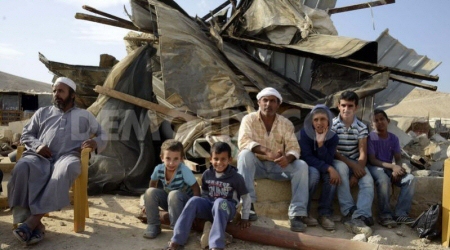 Two UN officials have called for an immediate freeze of Israel’s continuing demolition operations on Palestinian homes in the occupied West Bank.The coordinator of humanitarian and development activities of the United Nations in the occupied Palestinian territories, Robert Piper, and West Bank UNRWA director, Philippe Sanchez, expressed ‘deep concerns’ about the demolitions being carried out by Israeli Civil Administration, especially in the vulnerable Bedouin communities in area C, near East Jerusalem.

According to Al Ray Palestinian Media Agency, it was stated that ‘a total of 22 buildings in four gatherings were demolished including Red Khan Abu Falah, Valley Sncel, Beer Maskob and Al-Zaeem Bedouin. This led to the displacement of 78 Palestinians, including 49 children; the vast majority of them are Palestinian refugees.’

Said Piper: ‘The demolitions on Tuesday targeted some of the most vulnerable communities in the West Bank… the proportion of the displacement is particularly worrying since nearly 50 children lost their homes.’

Sanchez said that many of these refugee families had been displaced more than four times in the past four years.

Sanchez pointed out that four communities are among the 46 localities, situated in the center of the West Bank, which are included in Israel’s plans to move the Palestinian Bedouin communities to three specific sites.

The strategic implications of the demolition operations are clear; these demolitions take place in parallel with the settlement expansion, he added.

Sanchez had finally stressed that the international community has opposed project E-1 for a long time, as it considered an obstacle to achieving the two-state solution and a violation of international law.