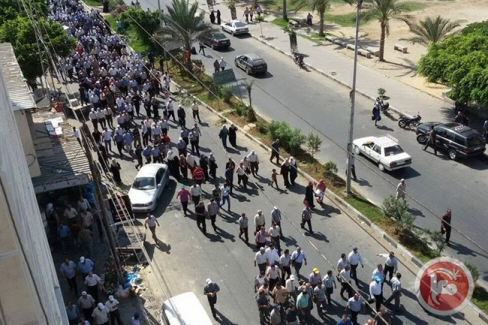 Around 225,000 Gazan schoolchildren were forced to return home, on Monday, after local staff at the UN agency for Palestinian refugees in Gaza (UNRWA) went on strike on the first day of the new school year.The strike comes amid a financial crisis in the agency that earlier threatened to delay the start of the school year.

‘We didn’t want to suspend classes, but the administration of UNRWA pushed us to take that step,’ secretary general of the union of UNRWA employees, Raafat Hamdouna, said.

The union met with UNRWA Commissioner-General Pierre Krahenbuhl on Sunday and said the ‘atmosphere wasn’t positive.’

The union is protesting against overcrowding at UNRWA schools and unpaid vacations. At present, there are over 50 children in each classroom, with employees urging the agency to reduce the maximum capacity to 38.

Hamdouna said union members will protest in five locations across Gaza, including a sit-in strike inside UNRWA’s Gaza City headquarters to be attended by 13,000 employees.
There are protests in the West Bank planned for Thursday, he added.

For Palestinian refugees, the start of the school year came as a relief after UNRWA warned for weeks that it would have to delay the school year if it was unable to cover a $101 million deficit.
The UN agency was only able to announce on Wednesday that the year would go ahead as scheduled, after it secured just short of $80 million in contributions against its deficit.

UNRWA Commissioner-General Pierre Krahenbuhl affirmed the agency’s commitment to its schools ‘because of how central education is to the identity and dignity of Palestine refugees.’
Around 1.2 million Palestinian children returned to school Monday for the start of the new school year in both Gaza and the West Bank, the Palestinian Ministry of Education said.

Out of a population of 1.8 million in the Gaza Strip, some 1.26 million are refugees, according to UN figures. UNRWA oversees education for most children — some 225,000 in 245 schools.

Dozens of schools were damaged and affected by last summer’s war between Palestinian militants and Israel.

In the occupied West Bank, children returned to school amid tributes to the 18-month-old boy killed last month along with his father when their home was firebombed by suspected Jewish extremists.
The school in Douma, the Palestinian village in the West Bank where the incident occurred, was renamed after the toddler, Ali Saad Dawabsha. The school year in the village was symbolically reopened by prime minister Rami Hamdallah.

The boy’s mother, Riham, taught at a school in a neighboring village. She remains in hospital with severe burns along with her other son, who is four.

‘The students are asking for any news about their teacher,’ Ahlam al-Masri, the principal of her school, told AFP.