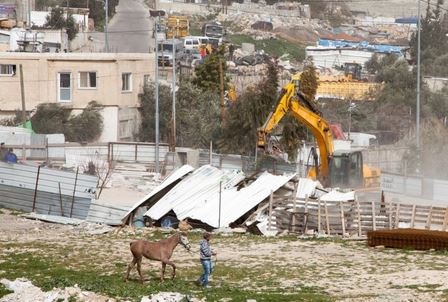 Israeli soldiers demolished, on Wednesday at dawn, several commercial and residential structures in the al-‘Ezariyya town, east of occupied East Jerusalem, after surrounding the town and invading it. The demolished structures were removed for the construction of a section of the Annexation Wall in the area.The WAFA News Agency has reported that the soldiers, undercover units, police officers and personnel of the “Civil Administration Office,” run by the army in the occupied West Bank, carried out the destruction of the Palestinian properties.

The demolished structures belong to Fateh Movement secretary in Jerusalem’s rural areas, Sami Abu Ghalia, and have been rented out to a number of families from Jerusalem, al-‘Ezariyya, and Arab al-Jahalin Bedouin Community.

The demolished buildings are a mobile home, and seven trade structures used for selling furniture, fruits and vegetables, a car wash facility and a store for selling silverware.

Spokesperson of the Popular Committee in East Jerusalem Hani Halabiyya said more than twenty military vehicles, and two bulldozers carried out the invasion.

Halabiyya added that Israel claims the structures are in the route of a section of the illegal Annexation Wall on privately owned Palestinian lands and property.

The army previously demolished several homes and structures belonging to Halabiyya for “being built without construction permits.”