Susiya Students: ‘Settlers follow us, steal our bags and rip our books.’ 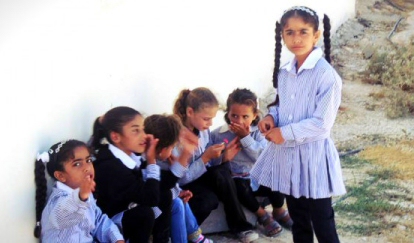 With the beginning of the new school year in Palestine, students of the South Hebron Hills village of Susiya, on Monday, revealed the struggles of going to school in light of continuous threats and settler attacks.On May 5th of 2015, the Israeli High Court of Justice ruled to allow the army to demolish the entire village of Susiya located in area C (which makes up 60% of the occupied West Bank and falls under Israeli military and civil control). The decision ruled to expel the residents, numbering around 340 men, women and children, to area A (which makes up 18% of the West Bank and falls under Palestinian authority).

The deportation decision followed Israeli settlers’ appeal to the court two months before, demanding the displacement of Palestinian natives, for the expansion of the settlement constructed on Susiya lands.

Since then, the villagers have suffered continuous harassment by the settlers and Israeli military forces, and the little students are no exception to the rule.

Headmaster of the Susiya Elementary School, Mohammad Nawaj’a, on Monday, told the Palestine News Network (PNN) that the school received a demolition threat in December 2011, under the pretext of having no construction permit.

The school then applied for a permission which was denied. Following that, the demolition threat reached out to the annexed street, health and water units.

“We existed here for hundreds of years,” Nawaj’a said. “But now, our homes and schools are illegal and we are strangers in our own land.”

“Settlers confiscate our land; and on it they build houses and facilities that are completely provided by water and electricity from Israeli occupation authorities,” the headmaster said, “in the meantime, we are given threats of eviction and demolition and deprived of our simplest rights so they can expand settlements and cleanse Palestine of Palestinians,” he added.

In confirmation, the students said that they have been going through daily assaults and harassment by settlers for years. Now, it reached a point where their schools are threatened by demolition too.

“We walk to school every morning, and the settlers threaten us every day. They follow us in their cars to scare us. They steal our bags, and rip off our books,” 12-year-old student Nagham Nawaj’a said.

For the sake of security, Nagham wished if the school had a bus to protect the students from daily humiliation. The little girl also stressed the need for all people to help overcome the Israeli occupation.

Student Khaldoun Shanran said “The settlers want to evacuate us from our homes, but we want to stay here in our homes and keep our school.”

Israeli authorities have already built the Susyia settlement on lands of the village, turning the villagers into a minority, and narrowing their space by surrounding them with settlements as shown in the map.

In light of these struggles and lack of security, the villagers expressed fears of the escalation of Israeli violations, calling on the international community to stop threats, occupation and illegal theft of land for settlement expansion, and to stand with Susiya.