Hundreds of Migrants to Israel Released from Desert Facility 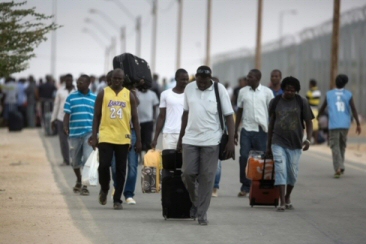 Israel released hundreds of African migrants from a desert detention center, Tuesday, after a court order. However, asylum seekers were left with few options after being barred from two cities.Detainees leaving the facility waited at bus stops for rides and wondered where they would live after being banned from Tel Aviv and Eilat, where African migrant communities have sprung up.

The mayor of a third city warned that freed migrants would be prevented from entering his town.
One man said he was leaving the Holot Detention Center with just $17 and a sandwich.

The supreme court ordered Israel to release illegal migrants held for more than a year at the detention center in the Negev desert, in a ruling that affected 1,178 asylum seekers.

On Tuesday, 750 people were released in small groups with the rest to be freed on Wednesday, said Sivan Weizman, a prison service spokeswoman.

Authorities have barred those freed from entering Tel Aviv and Eilat in the face of hostility from many residents.

As in other parts of the world, illegal migration has become a high-profile issue in Israel, with right-wing politicians calling for action to limit it and activists urging the government to accept people from countries such as Eritrea.

‘We don’t know where to go, where we’re going to sleep tonight,’ said Salah, a 33-year-old Sudanese man who has been in Israel for nine years, including 20 months at the detention center.
‘Where to now?’

‘They gave us a paper that says ‘Prohibited from going to Eilat or Tel Aviv’, but that’s where we know people. I don’t have money to rent an apartment. Where do I go now?’

Fissel Sidig Adam, a 28-year-old from the war-torn Sudanese region of Darfur, said he was leaving with ’64 shekels ($17, 14 euros) and a sandwich.’

‘The court decision is an important step and I appreciate it. But I expected more. I expected a real solution from the state, (such as) help.’

Migrants could be seen exiting through the barbed wire and metal gates surrounding the facility while pulling large suitcases behind them.

The authorities gave them 600 shekels a month while at Holot if they checked in each night. They were allowed to leave during the day, Weizman said.

Nissan Ben Hamo, the mayor of Arad near the Dead Sea, said on Facebook that he would call on residents to ‘defend their city’ if it became necessary.

He ordered staff and local police to deploy to the entrance of the city to block the freed migrants from entering.

Israel’s supreme court two weeks ago overturned a provision of a law that would have allowed illegal immigrants to be held for up to 20 months without trial.

It ruled that illegal migrants held for more than a year should be released within two weeks.
Official figures show 45,000 illegal immigrants are in Israel, almost all from Eritrea and Sudan. About two-thirds are Eritrean.

A recent UN report detailed how Eritrea, under Isaias Afwerki’s iron-fisted regime for 22 years, has created a repressive system in which people are routinely arrested on a whim, detained, tortured, killed or ‘disappeared’.

The risk of leaving

Unlike parts of Europe, Israel has not seen an influx of refugees from Libya and Syria, interior ministry spokeswoman Sabin Hadad said.

For those freed on Tuesday, trying to leave Israel may not be worth the risk.

In a graphic video issued in April by the Islamic State group in Libya, at least 28 African Christians were killed.

The video said the victims were Ethiopian, but three were identified as Eritreans reportedly trying to reach Europe by sea via Libya after being rejected for asylum in Israel.

Most of those in Israel illegally and who have not been detained live in poor areas of southern Tel Aviv, where there have been several protests over their presence.

Israeli Justice Minister Ayelet Shaked has been among those who have taken a hard line.
She was forced to admit a mistake earlier this month after posting a video online purporting to show a black migrant attacking a resident.

The footage was apparently recorded in Turkey.