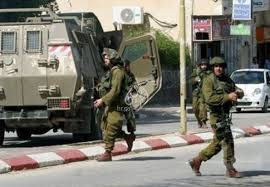 The sources added that the soldiers also kidnapped Anas Ali Hmeidat, 22, and Akram Jamil Samamra, 35, after storming and searching their homes in the ath-Thaheriyya and Surif towns.

In addition, coordinator of the Popular Committee against the Wall and Settlements, Mohammad Ayyad Awad, has reported that the soldiers invaded Beit Ummar town, north of Hebron, searched several homes in al-Hara at-Tehta and Khallet al-‘Ein neighborhoods, and kidnapped Mohannad Yousef ‘Awad, 22, and Nour Yousef ‘Awad, 23, and took them to the Etzion military and security base.