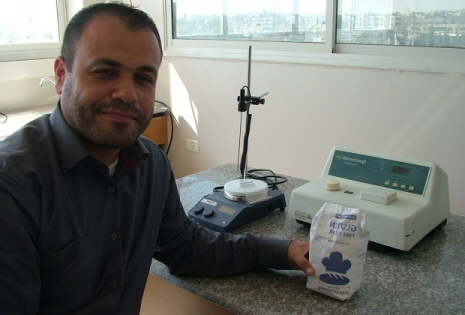 “While Israeli drones were roaring overhead and the fighter jets were targeting homes, I receive a SOS call to find food for celiac patients who were dying.”Al-Asqalani complains from the nine-year old Israeli blockade which undermines turning his project to be commercial in order to continuously produce amounts enough for all patients.

It was an ethical test for the Chemist Mohamed al-Asqalani, who was chosen by his close friend to find proper food for his dying wife as she was suffering from celiac and her special food had run out.

During the 2008/2009 Israeli offensive on the Gaza Strip, when the Israeli occupation and Egypt completely restricted the movement of people and goods in and out of the coastal enclave, Chemist Mohamed al-Asqalani planted the seed of a pioneering project that is able to solve fatigue nutrition problem for thousands of patients in Gaza, who faced definite death.

“At night, while the Israeli drones were roaring overhead and the fighter jets were striking homes, schools and universities, I received an unexpected urgent rescue call from one of my colleagues,” Al-Asqalani said. “My colleague told me that the special flour needed for his wife, who was suffer from celiac had run out and asked me to help him finding a solution.”

Patients, who suffer from celiac, can only eat food made of gluten-free flour; otherwise, they die. Al-Asqalani said that two celiac patients died during that 22-day Israeli offensive in 2008/2009.

Describing how difficult for him was the situation, Al-Asqalani said: “I had no previous knowledge of this kind of illness or the patients who suffer from it. I did not know what kind of flour was needed. All what I did know is that it is flour free of protein.” Gluten is the protein found in wheat, rye and barley.

“With much defiance,” Al-Asqalani said, “I launched my research and started working at my house, using kitchen appliances instead of lab equipment.”

The talented Palestinian chemist started at first to look for the easiest way to find an urgent solution for an urgent problem. Therefore, he developed an already existed flour which is made of corn. “This is good and it filled the gap, but I was not satisfied with it because it did not have all the specifications of the normal wheat flour,” he said.

“The journey of my research consisted of two stages; the first was the development of the corn flour. I could prepare gluten-free flour during the offensive, but that was a fast solution for an urgent problem,” he said. Only certain kinds of food are prepared of this flour.

“When the Israeli offensive ended,” the chemist said, “I resumed my research and I could produce gluten-free corn flour with the same specifications of the normal wheat flour, but it was not good for all kinds of bakeries.”

However, Al-Asqalani was not satisfied with his achievement because the corn flour could not be used to make most kinds of favourite Palestinian dishes made of wheat flour.

“Beside feeling secure,” he said, “I felt that patients want to eat several kinds of food like other family members.” He did not want them to feel isolated of their families when they sit on the same breakfast, lunch and dinner table everyday.

After producing the gluten-free flour made of corn, Al-Asqalani become in continuous contacts with the celiac patients from Gaza, Egypt, Saudi Arabia, the UAE and Jordan.

Human Land Charity in Gaza, the only official body looking after celiac patients in Gaza, contacted me. “All of them complained of one major problem,” Al-Asqalani said, “even when they have their special flour which meets international standards.”

“The patients and the charities spoke to me about their problems,” he said, “the Palestinian patients buy their special flour from Israel, while the others abroad buy it from Italy.” According to Al-Asqalani, Israel and Italy produce the most efficient gluten-free flour.

He said he knew more patients using it, but they do not mainly depend on it such as autism and PKU patients. The patients complained for Al-Asqalani that they are deprived of most of the meals made of wheat flour. “The Israeli and Italian gluten-free flour is made to meet the desire of the patients eating foods from Italian and Israeli cuisines, not the Arabic cuisine,” he said.

“Therefore, in 2010, I started the second stage of my research,” Al-Asqalani said. “I planned to produce gluten-free flour that is usable to for making all kinds of meals and bakeries made of the normal wheat flour in order to meet the desires of the patients who want to eat different kinds of meals like healthy people.”

The major challenge that faced Al-Asqalani was working at his home and paying for his researches from his own bucket. “Despite the huge demand for this flour, but no individuals, organisations or government have funded the researches which are expensive,” he said.

However, he started the second stage of his research to produce flour usable for all kinds of meals and bakeries. He refused to reveal much detail about the basic material, but he reiterated that they are licensed for human use.

“Using a number of gluten-free food material in addition to licensed E-Number Additives, I produced the new gluten-free flour, which is usable for all kinds of meals and bakeries made of the normal wheat flour with the same flavours,” Al-Asqalani, who hold PhD in Chemistry.

“Researches led to the production of the final outcome of this flour took five years,” Al-Asqalani said. “The new product was tested by the Saudi Food and Medicine Centre and the Egyptian National Centre for Food Researches,” he said, “both centres approved the product.”

Al-Asqalani is satisfied with the outcomes of his research because he offered a solution for thousands of patients in need for this product, not only in Gaza or the Arab countries, but also in the whole world.

After producing the successful product, getting production licenses from international organisations and getting acknowledgement from the patients themselves, Al-Asqalani hope to put the product into commercial lines.

“I received several offers to set up factories in different Arab countries such as Saudi Arabia, where there are more than 400,000 patients in need for this flour, the UAE, Egypt and Jordan,” he said. “But because of the Israeli siege, I am unable to move to any of these countries.”

In Gaza, where there are around 5,000 celiac, autism and PKU patients, Al-Asqalani said that he is able to go on a commercial production line for his product, but said: “I look at this product throughout a humanitarian aspect. However, it is not prevented here, but I cannot persuade myself to make profits from the people’s suffering.”

Despite his ratified success and huge need and demand on his product, Al-Asqalani is still looking for people to adopt his project pay for setting up a reliable factory to produce amounts enough for all the patients in Gaza and, if possible, in other countries. Al-Israa University in Gaza afforded a simple lab for Al-Asqalani only at the beginning of this year, when it opened.

“Ingredients are easily to be afforded and production is very cheap,” he said. “Gazans are still dependent on the Italian and the Israeli products, however, lab tests showed that my product is more reliable.”

During the time when he was developing his flour, Al-Asqalani could also produce gluten-free milk, which is essential for PKU patients, too. “I could achieve these imaginative products while living under Israeli siege and fire,” he concluded.