Dozens of Protesters Shot and Injured across West Bank 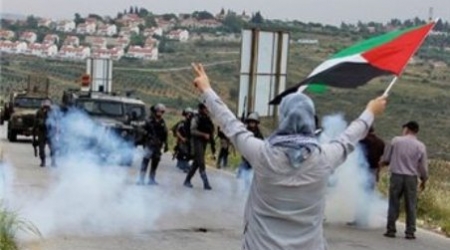 A Palestinian journalist was shot and injured with a rubber-coated steel bullet, while another was abducted during clashes which erupted, in Ramallah’s village of Bil’in, between Palestinian locals and the Israeli army, as the latter suppressed the weekly and peaceful anti-settlement demonstration. Injuries were also reported east of Qalqilia.The popular committee against the separation wall in the village said that journalist Mohammed Basman Yasin was hit with a rubber-coated steel bullet in the foot, while he was covering the event.

According to WAFA correspondence, Israeli forces also took another journalist, identified as Hamza Yasin, into cutody. Head of the popular committee, Iyad Birnat, was also taken.

Meanwhile, forces suppressed another peaceful demonstration organized in the village of Nabi Saleh, near Ramallah, shooting and injuring a child with a rubber-coated bullet in the foot, and causing many others to suffocate due to inhaling tear gas fired at them by the Israeli soldiers.

Many others sustained light injuries after being hit with rubber-coated bullets. They were all treated at the scene.

The soldiers further abducted Palestinian local Mahmoud al-Tamimi, along with an Italian activist.

The popular committee movement in Nabi Saleh said that soldiers attempted to nab a child, who sustained fractures in his arm during an Israeli army’ raid on the village two days ago; forces reportedly beat him, along with other locals. The child was identified as Mohammed Bassim.

Dozens of Palestinians were shot and injured with rubber-coated steel bullets, while a youth was shot with live ammunition as Israeli forces quelled the weekly and peaceful anti-settlement demonstration in the village of Kufr Qaddoum, to the east of Qalqilia, according to a local activist.

Forces fired live ammunition, rubber-coated steel bullets, tear gas canisters and stun grenades at demonstrators, shooting and injuring a youth from Shtawi family with a live bullet in his foot, while dozens others were treated at the scene for rubber bullet injuries. The youth was transferred to hospital for treatment.

Forces also employed the use of chemically treated waste water against demonstrators.

“Before 2003, the residents of Kufr Qaddoum would use a shorter road to the east in order to come and go to nearby cities and villages. However, as the settlements expanded so that they overwhelmed the road, it became closed for Palestinian use, said Addameer Human Rights Association.

The only alternative road is roughly six times longer than the previous route, disrupting the villagers’ ability to attend university, their jobs, and other vital aspects of their economic and social wellbeing, noted Addameer.

“Three Palestinian deaths relating to the road’s closure occurred between 2004 and 2005,” it said.

Although Kufr Qaddoum’s Popular Resistance Committee took their case to the Israeli High Court in 2003, the legal status of the road remains unchanged, stressed Addameer. After all legal appeals failed, villagers decided to organize weekly demonstrations in July 2011, a step that was met with violent suppression by Israeli forces.

Meanwhile, extremist settlers, late Thursday night, cut off the electricity supply to the village after they broke the locks of the village’s power distribution station located near the Israeli settlement of Qedumim, built illegally on the village’s land. As a result, the village locals were left without electricity for hours.