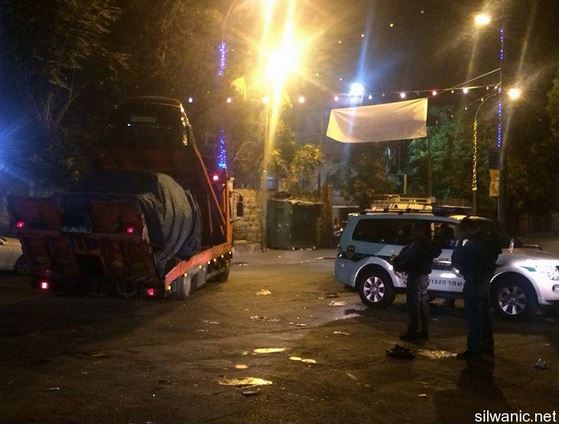 Israeli soldiers invaded, on Sunday at dawn, the town of Silwad, east of the central West Bank city of Ramallah, kidnapped a child, and held his 10-year-old brother in the bathroom while interrogating and threatening him. The army also kidnapped two young men in occupied East Jerusalem.The child, Hamza Shokri Hammad, 15 years of age, was kidnapped after a large number of soldiers smashed the family’s main door, and detained him in one of the rooms after forcing him brother Bilal, 10 years of age, into the bathroom, where he was threatened and interrogated.

Hammad was taken prisoner before the soldiers left the property; the family said the army confiscated mobile phones, Game CD’s, in addition to destroying a computer.

The family added that the soldiers also took some of Bilal’s toys, and scattered them outside the property.

The kidnapped child is the son of Moayyad Hammad, who was taken prisoner many years ago, and was sentenced to seven life terms.

Last week, the Israeli Prison Authority denied Hamza the right to visit his imprisoned father under the pretext that he is underage and needs a permit, although under Israeli law, children do not need a permit.

Also on Sunday at dawn, soldiers invaded the al-‘Isawiyya town, in occupied Jerusalem, kidnapped two young Palestinian men, and took them to an interrogation center in the city.

The two have been identified as Mahmoud Abdul-Raouf Mahmoud, and ‘Amid ‘Obeid.