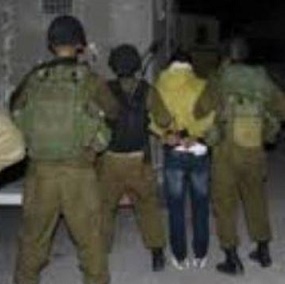 Israeli soldiers invaded, on Monday morning, the villages of Rommana and Zabbouba, west of the northern West Bank city of Jenin, stormed homes and searched them, and handed five Palestinians military warrants for interrogation in the Salem military base. Soldiers also demolished fifteen structures near Jerusalem. Media sources said the summoned Palestinians from Rommana have been identified as Zoheir Rashed al-Ahmad, 21, Mohammad Ghazi Mahajna, 24, Abdul-Rahim ‘Amour, 21, and Abdul-Rahim Abu Hammad, 24. They were all summoned after the soldiers invaded their homes, and violently searched them.

In Zabbouba nearby village, soldiers invaded the family home of Anas Qassem ‘Atatra, 30, and handed him a military order for interrogation, in the Salem base.

In addition, soldiers searched a home belonging to resident Mahmoud Zandeeq, and interrogated the family.

In related news, soldiers invaded Jaba’ town, northeast of occupied East Jerusalem, and demolished fifteen sheds and structures, belonging to Bedouin families of the al-‘Ara’ra family. Most of the demolished structures were installed in 1975 and 1976.

On Monday at dawn, soldiers Kidnapped five Palestinians, in the West Bank and Jerusalem