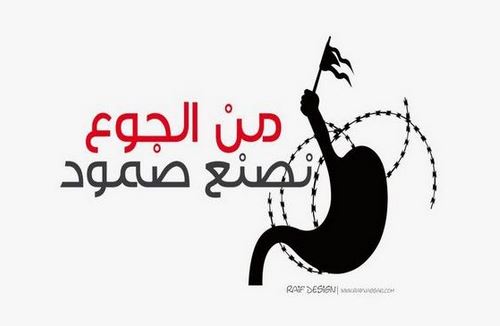 The head of the Palestinian Detainees’ Committee Issa Qaraqe said that five Palestinian detainees, held by Israel under arbitrary Administrative Detention orders without charges or trial, are ongoing with their hunger strike since August 20.His statements came during a solidarity protest held in the Deheishe refugee camp, in Bethlehem, as hundreds of Palestinians, including social and political leaders expressed their support to all detainees, especially those held under Administrative Detention orders.

He added that, by forcing the detainees into solitary confinement, the Israeli Prison Authority could escalate its violations against them, intimidate and even force-feed them.

They said that dozens of detainees are likely to join the strike, and demanded an end to Israel’s illegal Administrative Detention policies, and its constant violations of International Law and the Fourth Geneva Convention.

The mother of detainees Samer, Medhat and their sister lawyer Shireen al-‘Eesawy, all held by Israel, called for more support to all detainees, and to provide them with the urgently needed protection as Israel continues to escalate it violations against them.

It is worth mentioning that the striking detainees said, in a statement leaked from their solitary confinement cells, that their legitimate struggle will continue until voiding this illegal detention, holding the detainees captive for months, and even years, behind bars without charges or trial.

‘Administrative Detention is like a sword pointed to our necks, eating our flesh, and stealing our years without any legal process or trial,’ they said, ‘We will continue our strike; we will fight with our flesh and empty bowels.”

They also called for more public, local, regional and international support of their legitimate cause and struggle, in order to end the Israeli crimes, and the outrageous violations of International Law.