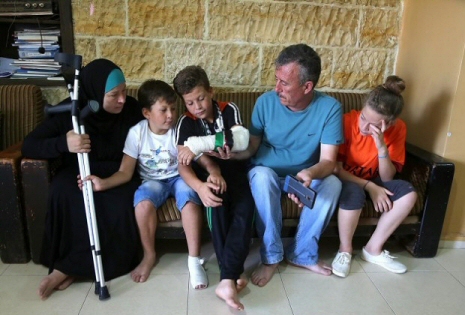 Israeli forces took into custody, on Tuesday, the parents of Mohammad al-Tamimi, the Palestinian boy who was beaten by a masked Israeli soldier in Al-Nabi Saleh Village on Friday. The pictures of the boy went viral on internet.“The Israeli army arrested Basil and his wife, Nariman, as they tried to cross an Israel military checkpoint at the entrance of Al-Nabi Saleh Village north of Ramallah,” Bassam al-Tamimi, a relative, said.

He further stated, according to Days of Palestine: “The Israeli soldiers arrested Basel and his wife and prevented all of the family members from communicating with them.”

Palestinian sources confirmed the arrest, noting that the parents were taken by the Israeli soldiers to an unknown place.

Regarding Mohammad, the Israeli soldier beat him savagely, claiming he had threw stones at him. However, this remains questionable, as the boy’s hand was broken and clearly in a cast.

Female family members pulled at the boy, as he refused to be led by the Israeli soldiers, who then released him.

After the incident, a request was reportedly submitted to the Israeli police for the arrest of the Al-Tamimi family, who were accused of “assaulting” the soldier.