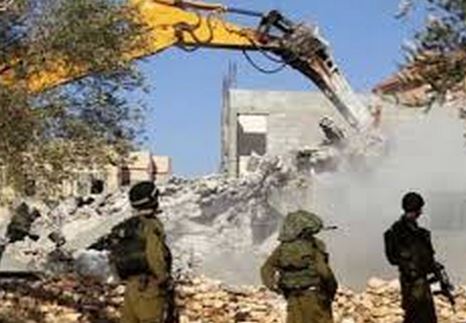 He added that the family only received the demolition orders two weeks ago, and did not have enough time to appeal them.

Area C is the largest division of the occupied West Bank, comprising 60% of the total territory; it falls under full Israeli military and security control; the occupation army, and its “Civil Administration Office,” solely controls all constructions, planning and zoning laws.

Israel’s illegal settlements are in Area C, while Israel controls all constructions, including construction permits and zoning laws.

Area C also contains the vast majority of the natural resources, and open areas, including the Jordan Valley and the West Bank’s Plains.

Although Area C is under full Israeli control, they lack basic services and infrastructure and adequate access to water, while Israel’s illegal colonies receive all services and constant flow of water for personal and recreational use, such as swimming pools and resorts.

The Israeli Civil Administration only allocated %1 of Area C for Palestinian development, while %99 are off-limits, or at least under strict Israel’s laws preventing Palestinian constructions and development.