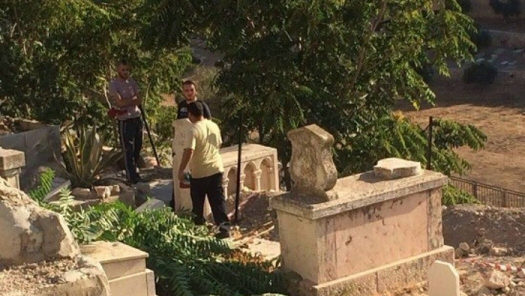 On August 16th, the Israeli Nature and Parks Authority, accompanied by Israeli police, cordoned off an area of the Bab al Rahma cemetery that belongs to Silwan locals Bisher Huseeini and Baha’y Ansari.

The cemetery sits across from the northeastern wall of the Al Aqsa mosque and is over 1,000 years old. Many of the Prophet Mohammad’s companions rest there.

Two weeks later, on September 2nd, members of the Nature and Park Authority returned and reinforced this wire fence. When locals asked to see a court order for the construction, they were refused.Soon after, Palestinians disrupted the workers and removed the fence.

To challenge the city’s latest land-grab, Emek Shaveh, a consortium of archaeologists representing Silwan residents, petitioned the High Court to stop closure of the cemetery.

Quoting the petition, the Jerusalem Post notes that: “it is the Nature and Parks Authority’s duty to care for the antiquities and historical sites for the benefit of all citizens, and not turn national parks into a tool for land appropriation and dispossession of residents.”

In their complaint against the Nature and Parks Authority, the commission also accused the city of collaborating with the setter organization, Elad.

This is not the first time that Silwan’s access to and ownership of the Bab al Rahma cemetery has been challenged. In 2006, the Committee to Prevent the Destruction of Antiquity on the Temple Mount, along with right-wing activist Aryeh Koenig, petitioned the High Court to establish the cemetery as national park and antiquities site. The court refused, but decided to regulate where locals bury their dead.

The Court’s 2006 decision stands as an early example of the burgeoning relationship between the Israeli government and the right-wing Temple movement.

Besides the Jerusalem municipality encroaching on their cemetery, Silwan also contended with the increased presence of settlers this week. Since August 27th, settlers affiliated with Ateret Cohanim seized three buildings in Silwan, with police protection.

The city’s actions in Silwan this week – attempting to confiscate Bab al Rahma with Elad and providing police protection to settlers while they seize buildings in the neighbourhood – indicate that the intimate relationship between the Israeli government and right-wing organizations has only grown with time, and is thriving in new, frighting ways to displace and dispossess Palestinians from Jerusalem.