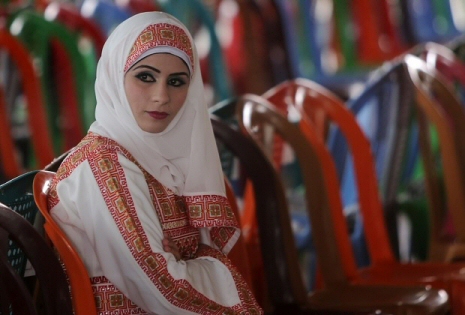 Israeli, Egyptian and international siege have been imposed on Gaza for nine years obliges grooms to attend wedding parties via Skype.Andalou/Days of Palestine reports that, in one of the wedding halls in the Gaza Strip, bride Salwa Reziq is sitting alone on stage her groom is nowhere to be seen. He works in Qatar and, because of the ongoing blockade on the Strip, is unable to attend his wedding.

Everything in the wedding hall seems ideal except Salwa, 24, who is sitting without her groom, Khalid Reziq, 29, who is watching the wedding via Skype.

Salwa has been engaged to her cousin Khalid for one year, awaiting his return to Gaza, however, she lost hope and decided to organise the wedding alone and then travel to Khalid when the crossings are open.

“I feel sad for marrying my daughter off to her cousin without his attendance,” mother of the bride Sameera, 49, said. “We waited for him to come back for a long time, but in the end, we decided to take this decision.”

Such wedding celebrations have become common in Gaza due to the almost continuous closure of the Rafah Crossing, which is the main terminal for the more than 1.8 million Gazans to the outside world.

Egypt closed the crossing in July 2013 when General Abdel Fatah Al-Sisi carried out a military coup against the first-freely elected Egyptian President Mohamed Morsi. It is now only open sporadically.

Rana Yaghi, 25, said she was forced to organise her wedding knowing her husband would be unable to attend as he works in Saudi Arabia.

“It is shocking and saddening when the wedding ends and you go to your father’s home again, not to your husband’s home,” Yaghi said. “We waited for one year and then decided to take this decision. The siege causes much trouble for us.”

Huda Faris, 23, said she couldn’t fully enjoy her wedding because her parents, who live in Kuwait, were unable to attend. “I had never imagined I’d get married without my parents being present, without holding my father’s hand,” she said.

“We waited and waited, but decided to organise the wedding without them,” she added. “My brothers attended my wedding, but that was not the ideal wedding I had planned for.”

Thousands of Palestinians have been living in diaspora for decades. Huda’s father is working in Kuwait and could only watch the wedding party via Skype. “It was not like a wedding party,” she said, “it was like a conference to exchange old memories when we were together.”

Sheikh Hassan Al-Jojo, head of the Sharia Court which registers marriages and divorces in Gaza, said that many engagements are being broken off because of the difficulties couples face in uniting and crossing the border.

The Israeli occupation has imposed sever restrictions on the movement of Gazans since 2006, when Hamas won the Palestinian general elections.

Since then, Egyptian authorities have repeatedly closed the Rafah Crossing.