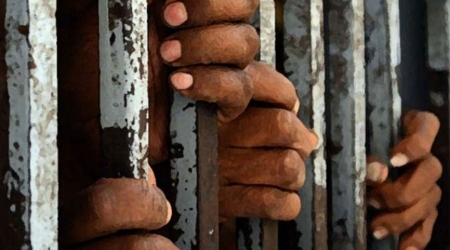 The Palestinian National Authority’s Committee for Prisoners’ Affairs (PNA) said, Friday, that eight Palestinian prisoners in Israeli jails were on hunger strike over the unlawful policy of administrative detention which has been highly criticized by international bodies.According to Al Ray Palestinian Media Agency, the PNA report added that Ghassan Zawahra, who is being held in solitary confinement at Eshel prison and has been on strike for over two weeks, had escalated his hunger strike and stopped drinking water.

The other hunger strikers protesting their detainment without charge or trial are held in solitary confinement at Ela, Ashkelon and Negev prisons.

The Israeli regime recently passed a bill allowing the force-feeding of hunger-striking prisoners to counter the Palestinian hunger-strikers’ protest.

However, critics of force-feeding say the practice is not only a means of torture, but also an unethical violation of the subject’s autonomy.

The former Palestinian prisoner ended his 65-day-long hunger strike on August 20, a day after his detention was suspended.

Allan has vowed to renew his hunger strike in protest against Israel’s administrative detention policy if he is rearrested.

“I am now released and if the [Israeli] occupation (occupiers) detains me again, then I will return to the hunger strike until they put an end to this tragedy I am going through as are hundreds of administrative prisoners,” the 31-year-old lawyer said on August 23.

He called on Tel Aviv to “immediately” end its policy of detaining individuals indefinitely without trial or access to a lawyer.

The Association for Civil Rights in Israel says the majority of prisoners who go on hunger strike are the Palestinian prisoners who are being brutally held in administrative detention.

Al Ray additionally stated that over 7,000 Palestinians are reportedly incarcerated in 17 Israeli prisons and detention centers.

According to the prisoners’ rights group, Addameer, 400 Palestinians are being held in Israeli jails under administrative detention at present.