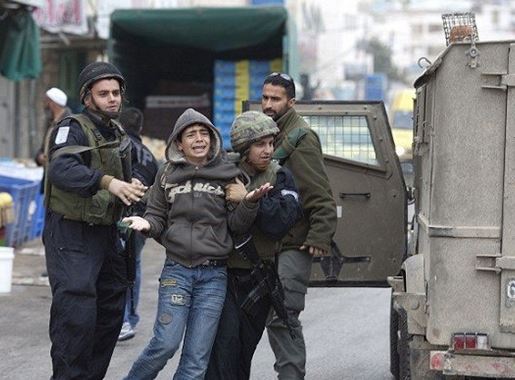 The Palestinian Detainees’ Committee has reported that the number of Palestinian children, held by Israel in the ‘Ofer Prison, has arrived to 100, especially since August witnessed the largest number of abductions of children since the beginning of the year.Representative of detained children in ‘Ofer, detainee Abdul-Fattah Doula, who is serving a 15-year term, said 42 Palestinian children transferred to ‘Ofer in August, including many who are only 13 to 15 years of age.

Doula added that 23 children were kidnapped from their homes, 5 on military roadblocks, 4 were taken prisoner from their neighborhoods and towns, and nine after being summoned for interrogation.

At least eight of the kidnapped children were violently beaten by the soldiers, while abducting them.

He also said that three children remained under interrogation, without legal representation, for 26 days, and three others have been repeatedly detained and imprisoned by Israel.

Mohammad al-A’raj, one of the lawyers of the Detainees’ Committee, said 21 children were sentenced, last month, by the ‘Ofer Israeli Military Court, to periods varying between 6 and 19 months, and were ordered to pay high fines, mounting to more than 40.000 New Israeli Shekels.

He added that, since the beginning of this year, Israeli courts ordered high fines against many detained children, mounting, until the end of August, to 317.000 New Israeli Shekels.

Al-A’raj also said that 30 of the imprisoned children suffer various health issues, including respiratory and Diabetes, and many of them were wounded during their abduction.

Many of the detained children were already receiving treatment prior to their abduction, while Israeli continues to deny them the right to medical treatment.

‘Among the main violations against the detained children are holding them for more than 24 hours without charges, and denying them the right to a lawyer or a family member during interrogation,’ Al-A’raj added, ‘They are also placed in holding cells with adults, in direct violation of their basic rights; some are sent to court a year after their abduction.’