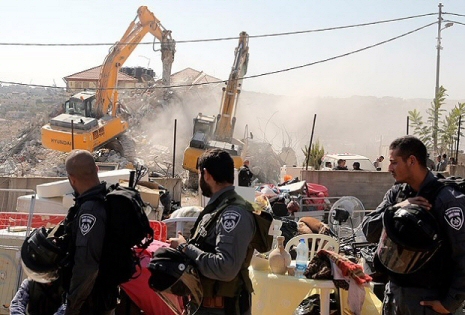 The Israeli occupation is set to demolish 13,000 Palestinian buildings in the occupied West Bank, over the course of one year, a UN report said on Monday. (Other media sources cite 17,000.)“Official data released by the Israeli authorities indicate that over 11,000 demolition orders – affecting an estimated 13,000 Palestinian-owned structures, including homes – are currently ‘outstanding’ in Area C of the West Bank,” the report said.

According to Days of Palestine, the report, which was issued by the United Nations Office for the Coordination of Humanitarian Affairs occupied Palestinian territory (OCHA) and is titled “Under Threat,” included detailed information about everything making the Palestinians in the occupied West Bank live in a state of uncertainty.

Based on the notorious Oslo Accords signed between the PLO and the Israeli occupation in 1995, the occupied West Bank is divided into three areas: A, B and C.

Area A represents 18 percent of the whole area of the West Bank and it is under Palestinian Authority (PA) administrative and security control.

Meanwhile, Area B represents 21 percent of the total area of the West Bank and it is under joint PA administrative control and Israeli security control.

Under the agreement, Area C, which is under full Israeli security and administrative control, represents 61 percent of the West Bank. It was agreed to be transferred to the PA by the end of 1998. Some 300,000 Palestinians reside inside the area in 532 residential gathering.

In area C, it is impossible for the Palestinians to get building permits because of the complicated Israeli measures.

“The planning and zoning regime applied by the Israeli authorities, including the ways in which public land is allocated, makes it virtually impossible for Palestinians to obtain building permits in most of Area C,” the UN report says.

According to the report, the Israeli Civil Administration data revealed that Palestinians submitted 2,020 requests for building permits in Area C between 2010 and 2014 and only 33 of them (1.5 percent) were approved.

Recently, a number of international organisations have intensified their criticism of the Israeli stepped up demolition activities in the West Bank.

“For 70 years, they have been trying to get Arabs off the land so the Jews can move in,” Palestinian citizen said. “We feel like we cannot live, it is not something people feel in the West, only us here.”

He added: “When I tell Israeli forces that I have a family to provide for they do not care.”