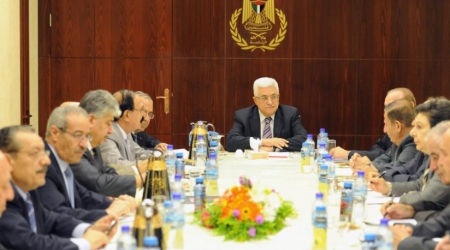 The Executive Committee of the Palestinian Liberation Organization (PLO) decided, Monday, to postpone holding the convocation of Palestinian National Council (PNC), which was to be held mid-September, in Ramallah. Al Ray reports that Dr. Hanan Ashrawi, a member of executive committee, said to Anadalou news agency that the executive committee addressed the head of PNC to postpone the convocation, in order to complete the arrangement for a session that sereves the Palestinian cause.

She added that the committee held a consultative meeting, headed by PA president Mahmoud Abbas, to discuss a number of issues and, most prominently, the requirement for holding a successive council, ending the political split, forming a national unity government, and the holding of legislative and presidential elections.

She explained that the committee submitted a request to the head of PNC, Saleem al-Zanoun to postpone the meeting.

Hundreds of academic and independent personalities also signed a petition demanding the postponement of the meeting.

They explained that the goal of holding the meeting is to relieve some of the executive committee members who constitute the opponents of Abbas, while the PLO and Fateh rejected these claims.

Hamas leader Khaled Mashal said, in a press conference in Duha, that holding the National Council by its own initiative has negative impacts on the Palestinian cause, and would fuel internal division.

He called on the leadership of the PLO to convene, and to study the current situation with various Palestinian issues, stressing on the willingness of Hamas to hold the meeting in any Arab country.

The Palestinian National Council is the legislative body of the Palestine Liberation Organization (PLO) and elects its Executive Committee (PLO EC), which assumes leadership of the organization between its sessions. The PNC is the highest authority in the PLO, responsible for formulating its policies and programs. It serves as the parliament for all Palestinians in and outside of the occupied Palestinian territories, it represents all sectors of the Palestinian community worldwide, including political parties, popular organizations, resistance movements, and independent figures from all sectors of life.