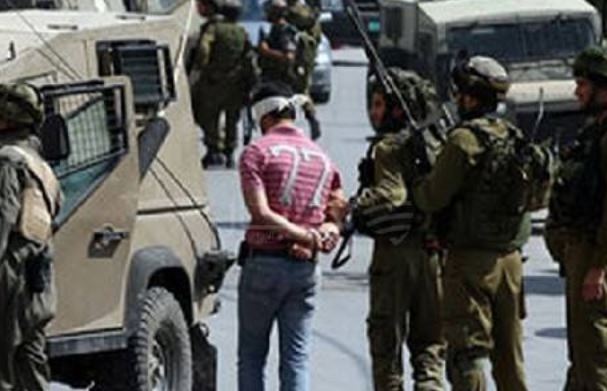 Israeli soldiers kidnapped, on Wednesday at dawn, nine Palestinians in different parts of the occupied West Bank, during military invasions targeting various Palestinian communities, and uprooted agricultural lands near Hebron. Several military vehicles invaded the al-Jalazoun refugee camp, north of the central West Bank city of Ramallah, before breaking into a number of homes, and searching them, the Palestinian Prisoners Society (PPS) has reported.

The invasion led to clashes with local youths who hurled stones on army vehicles, while the soldiers fired gas bombs and rubber-coated metal bullets.

It is worth mentioning that 95 Palestinians from the al-Jalazoun are held by Israel in a number of detention and interrogation centers.

In addition, soldiers invaded Doura and Surif towns, in the southern West Bank district of Hebron, and kidnapped four Palestinians after storming their homes, and searching them.

The kidnapped have been identified as ‘Aahed Khaled Eghneimat, 25, Mohammad Ahmad Eghneimat, 25, and Mahmoud Mohammad al-Qadi, 36, from Surif, and Nasr Mohammad Rajoub, 25, from Doura town, south of Hebron.

Furthermore, the PPS said that the soldiers invaded ‘Atteel village, in the northern West Bank district of Tulkarem, and kidnapped Mos’ab Samih Eqteish, 23, after invading his home and searching it.

In related news, soldiers invaded and bulldozed Palestinian farmlands in the al-Baq’a area, east of Hebron, destroyed and confiscated an irrigation network.

Resident Badran Jaber told the WAFA News Agency that the soldiers bulldozed three Dunams belonging to him, and were planted with summer produce, and bulldozed a nearby farmland belonging to one of his relatives, before destroying and confiscating its irrigation network.

Also on Wednesday at dawn, soldiers kidnapped three young Palestinian men after breaking into their homes, in the at-Tour village, in occupied East Jerusalem; the three are former political prisoners.