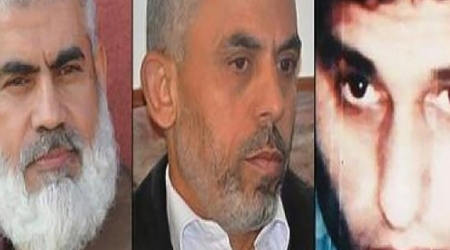 The US State Department announced, on Tuesday, that three Hamas leaders, along with a Hezbollah spokesperson, have been added to the specially designated global terrorist list, subjecting them to US sanctions.According to Al Ray Palestinian Media Agency, senior commander Muhammed Dief and two freed leaders, Yahya Sinwar and Ruhi Mushtaha, are on the list.

The move will freeze any assets they may have in US jurisdictions and prohibit Americans from doing any business with them.

Three of the four had been previously arrested by Israeli authorities for attacks on Israelis, but were later released in prisoner exchanges, including the 2011 swap that led to the release of kidnapped Israeli soldier Gilad Shalit.

Hamas denounced the decision as ‘immoral and against international law’ on its Twitter account, accusing Washington of ‘backing Israeli terrorism’.

Separately, Hamas spokesman Sami Abu Zuhri said that blacklisting senior figures would not stop the group from succeeding in their national duty of protecting their people and liberating Palestine.

Hamas was democratically elected in 2006, with the nomination of Ismail Haniyeh as Prime Minister over the Gaza Strip.

The West Bank is controlled mainly by Fateh leadership.