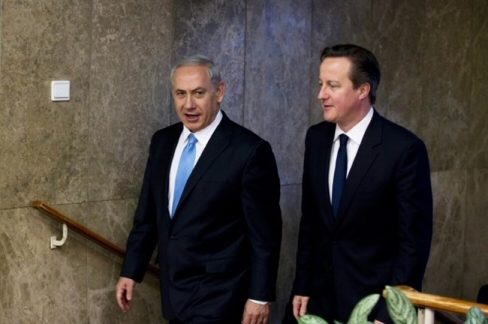 Israeli Prime Minister Benjamin Netanyahu is to visit Britain, this week, for talks with his counterpart David Cameron, as the right-wing Israeli leader faces diplomatic pressure over illegal settlements in the occupied West Bank and stalled peace efforts.Netanyahu, who last visited for the 2013 funeral of former prime minister Margaret Thatcher, has also been the subject of a petition, ahead of his trip, demanding his arrest for war crimes during last year’s devastating Gaza conflict.

As of Tuesday, the petition posted to the British parliament’s website had been signed by more than 106,000 people. The British government has officially responded, saying that visiting heads of government are immune from prosecution.

Last summer’s 50-day war took a heavy toll on the coastal enclave, killing 2,251 Palestinians, mostly civilians and nearly a quarter children, and destroying thousands of homes. Seventy-three people were killed on the Israeli side, nearly all soldiers.

According to AFP, the visit will see the two prime ministers meet on Thursday, the day after Netanyahu’s arrival. He departs on Friday.

The Israeli leader’s office declined to provide details of what will be on the agenda, although the visit comes with a number of tense issues facing his government.

Britain is one of a number of European countries which have been pushing for the separate labeling of products from Israeli settlements in the occupied West Bank and Israel remains deeply concerned by July’s nuclear deal between Iran and major powers.

Britain, which was one of the six powers that negotiated the accord that Israel strongly opposed, reopened its embassy in Tehran last month.

Intelligence sharing is also likely to be on the agenda amid concerns over the Islamic State group and suspected militants travelling to and from the region, analysts say.

Asked about the meeting between the two leaders, an Israeli official would say only that regional and bilateral issues would be addressed and that the talks would seek ‘to enhance what is already a very good relationship.’

British Foreign Secretary Philip Hammond visited in July in a bid to reassure Israeli leaders over the nuclear deal, but he and Netanyahu ended up sparring publicly over the agreement.

The Israeli premier argues that the restrictions placed on Iran’s nuclear program will not block its path to an atomic weapon and that the lifting of international sanctions will provide it with more funds to support militant groups around the region.

Israel is believed to be the only country in the Middle East with atomic bombs, although it has never confirmed it and is not signatory to the Nuclear Non-proliferation Treaty.

Beyond Iran, Cameron may seek to press Netanyahu on his government’s persistent expansion of Jewish settlements in the West Bank, considered illegal under international law.

Settlement construction was a leading factor in the collapse in the last round of US-brokered peace talks between Israel and the Palestinians in April 2014 and the issue remains a major obstacle to any relaunch.

More than 500,000 Israelis live in settlements across occupied East Jerusalem and the West Bank, and the Israeli government is actively encouraged to their expansion.

In April, 16 European Union member states, including Britain, urged the bloc to clearly label products which originated in Jewish settlements in the occupied Palestinian territory, including East Jerusalem.
Netanyahu caused further frustration among Western governments during his successful campaign for re-election in March when he ruled out the establishment of a Palestinian state.

He later backtracked on the comments but they were widely seen as raising question marks about his commitment to the two-state solution which is the basis of the peace process.

During the 2013 negotiations, Israeli officials announced, and, eventually, carried out in full force, plans to build thousands of additional homes in illegal settlements across the occupied West Bank, while continuing to further seize lands, demolish homes and agricultural resources and, thus, leaving scores of Palestinian families severely disenfranchised and without so much as a roof over their heads to shelter them from inclement weather.

Yossi Mekelberg of Regent’s University in London and the Chatham House think tank’s Middle East program said Netanyahu was likely to be concerned by a possible ‘gradual erosion of Israel’s position in the world’ which he would want to counter.

‘I think he thinks Cameron is one of the friendlier faces as far as Israel is concerned,’ Mekelberg said.

Labeling of settlement goods in the European Union as well as a separate boycott movement targeting Israel would have ‘incremental’ effects, he said.