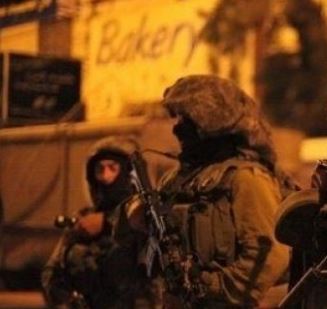 Israeli soldiers fired, on Wednesday at dawn, several rounds of live ammunition on a number of homes in the ‘Aida refugee camp, north of the West Bank city of Bethlehem.Media sources said the soldiers, stationed on the military tower of the Annexation Wall, overlooking the refugee camp, opened fire on the homes without any apparent justification. The attack caused property damage.

In addition, soldiers invaded the northern part of Bethlehem, and drove through several neighborhoods before withdrawing.

The army also installed roadblocks on the main entrances of several towns, south and west of Bethlehem, and invaded Harmala area, in addition to al-‘Obeydiyya town, east of Bethlehem.