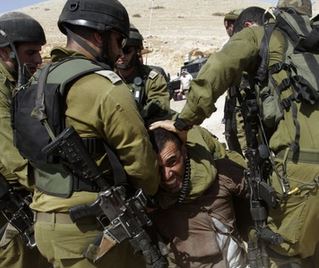 At least five Palestinians have been kidnapped, earlier Wednesday, after Israeli soldiers invaded various villages and towns in different parts of the occupied West Bank.Media sources in Hebron, in the southern part of the West Bank, has reported that the several Israeli military vehicles invaded Doura town, north of the city, searched homes and kidnapped one Palestinian identified as Hazem Akram ‘Awad, 20.

The soldiers also invaded the al-‘Arroub refugee camp, north of Hebron, and kidnapped Mohammad Abdul-Fattah Jawabra, 19, after storming his home.

Another Palestinian was also kidnapped, in the Shiokh al-‘Arroub village, after the soldiers invaded his home and many nearby homes. He has been identified as Zoheir Halayqa, 24.

Meanwhile, Israeli Channel 7 has reported that the soldiers arrested two Palestinians in Hizma town, near Jerusalem.