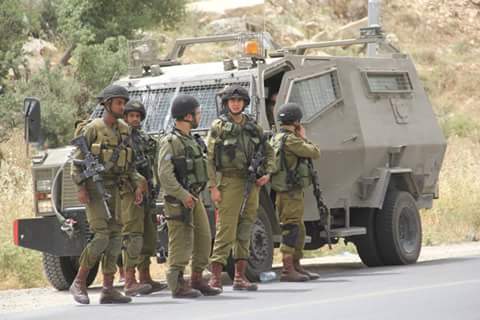 Israeli soldiers shot and injured, on Friday evening, three Palestinians, and kidnapped one of the wounded, at the northern entrance of the West Bank city of Bethlehem. Many Palestinians have also been injured in Hebron, before the soldiers kidnapped three others.The Palestine TV has reported that clashes took place near the Bilal Bin Rabah Mosque, in Bethlehem, and that the soldiers fired several rounds of live ammunition, rubber-coated steel bullets and gas bombs.

It added that two Palestinians were shot with live rounds, and one with a rubber-coated steel bullet, before the army kidnapped one of the wounded Palestinians, and took him to an unknown destination.

In addition, several Palestinians have been injured, on Friday evening, during clashes with Israeli soldiers invading the northern area of Halhoul town, north of the southern West Bank city of Hebron.

The soldiers also kidnapped three Palestinians, all from the Zama’ra family, and took them to an unknown destination.

Medical sources said many residents suffered the effects of tear gas inhalation, especially since the soldiers deliberately fire gas bombs at homes in the areas of clashes.

Clashes also took place in every part of the occupied West Bank Friday as the Palestinians continued to protest the Israeli violations against the Al-Aqsa Mosque, in occupied Jerusalem, the attempts to divide and control it, and the ongoing assaults carried out by the soldiers and extremists against Palestinian men, women and children in the mosque courtyards and around it.

The army also caused excessive damage and fires in the Al-Aqsa Mosque after firing dozens of gas bombs and concussion grenades into the holy site.

Also on Friday at dawn, soldiers invaded the Rashayda village, east of the West bank city of Bethlehem, and kidnapped one Palestinian.

In related news, the army said it arrested, on Friday at dawn, three Palestinians in Kharbtha al-Mesbah village, west of Ramallah, and one in Hebron city.

On Friday at night, soldiers kidnapped a 10-year-old Palestinian boy twice; he was kidnapped and released, then kidnapped yet again – full story by the International Solidarity Movement (ISM).
Related Article: