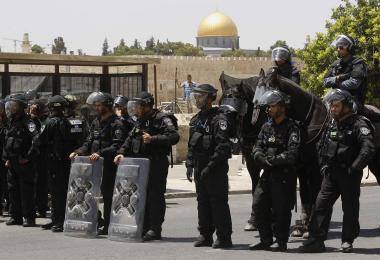 Israeli soldiers attacked, on Friday evening members of the Es’eeda Palestinian family, in Wad al-Jouz, in occupied East Jerusalem, fractured the arm of one woman, shot a girl with a rubber-coated steel bullet in her arm, and destroyed three cars owned by the family.Resident ‘Adnan Es’eeda told the WAFA News Agency that the soldiers caused several fractures in his wife’s arm, and shot his niece, in addition to deliberately causing damage to three cars owned by the family.

He added that the assaults took place as the soldiers attacked Palestinian protesters in the area, especially near the ‘Abdin Mosque in the neighborhood, assaulted many protesters with clubs and batons, and fired dozens of gas bombs and concussion grenades.

In addition, the soldiers kidnapped a Palestinian teenager, the son of the Manuscripts Department head in the Al-Aqsa Mosque, in occupied Jerusalem. His abduction comes just 24 hours after they kidnapped his brother.

Also on Friday, soldiers kidnapped two Palestinian children and an elderly man, in in Jerusalem.