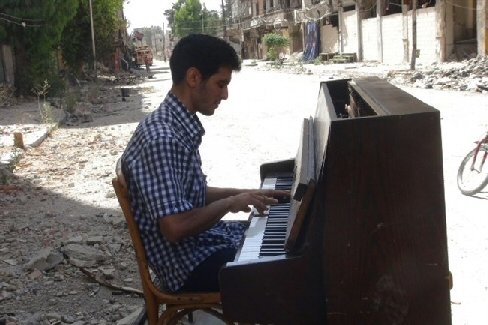 Three years of siege, famine and bombing of his Damascus refugee camp didn’t kill celebrated Palestinian musician Aeham al-Ahmad, but something died inside him the day militants burnt his beloved piano in front of his eyes.It was then that Ahmad, whose music had brought consolation, even a bit of joy, to Yarmouk camp’s beleaguered residents, decided to join thousands of others and seek refuge in Europe.

‘They burned it in April, on my birthday. It was my most cherished possession,’ Ahmad said.
‘The piano wasn’t just an instrument. It was like the death of a friend.’

For 27-year-old Ahmad, whose songs of hope amid the rubble of Syria’s largest Palestinian camp became a social media sensation last year, ‘it was a very painful moment.’

Since Syria’s civil war struck Yarmouk in 2013, the once-thriving neighborhood saw its population dwindle from as many as 160,000 Palestinians and Syrians to barely 18,000 people.

The camp was caught up in fighting among government forces and militants and suffered a devastating siege by the Syrian army. About 200 people died from malnutrition and a lack of medicines.

Ahmad became a symbol of hope, helping Yarmouk’s people — particularly its children — forget for a moment the brutal war raging around them with every note he played.

‘The days when I felt the most helpless were when I had money, but I could not get milk for my year-old baby Kinan, or when my older son Ahmad would ask me for a biscuit,’ he said.
‘It was the worst feeling.’

But after Islamic State group militants attacked the camp in April, Ahmad’s gentle, tentative ray of light was engulfed in flames.

He was in a pickup truck, trying to move his piano to nearby Yalda, where his wife and two boys were living, when he was stopped at a militant checkpoint.

‘Don’t you know that music is haram (forbidden by Islam),’ a gunman asked, before torching his beloved instrument.

Ahmad had stayed in Yarmouk until the day IS reduced his battered but precious upright piano to ashes: ‘That’s when I decided to leave.’

He would make for Germany, from where he would then try to get his family out of Syria.
He began the dangerous journey out of Damascus ‘as rockets rained down,’ heading north through the provinces of Homs, Hama, and Idlib until he reached the Turkish border.

‘At every step, I would meet another trafficker of human flesh,’ he recalled.

With the help of smugglers, he avoided Turkey’s increasingly watchful security forces by crawling through barriers of barbed wire and spending nights sleeping fitfully in dark forests.

With other Syrian men, women, and children, Ahmad trekked through mountainous terrain to reach the Turkish coast.

‘Once, we went 24 hours without eating a thing; the children were so hungry they would cry. It was horrible,’ Ahmad said.

On September 10, he began posting pictures on Facebook to document his journey.
The first was of his emaciated face. When he was in Yarmouk, he weighed a mere 45 kilos (99 pounds).

‘Tragedy has crossed the seas’

When he finally arrived in Izmir on the Mediterranean, Turkey’s second port, Ahmad was shocked to see refugees ‘sleeping on sidewalks as they couldn’t afford a hotel room.’

A trafficker arranged for him to spend the night in an apartment ‘full of rats and insects.’
Then, he and some 70 others were crammed into a tiny van heading to the coastline, where they would take a dinghy to the Greek island of Lesbos.

They each paid smugglers $1,250, as thousands of others had done, knowing they might not survive.
Suddenly gripped with fear, Ahmad took to his Facebook travel journal, ‘Diaries of a Traveler in the Sea.’

‘Dearest Mediterranean, I am Aeham and would like to safely ride your waves,’ he posted on Monday.

When the first rays of sunlight struck the sea at dawn on Thursday, Ahmad found himself on a Greek beach.

Tapping along on his knees, he sang a tragic tune about the ‘death haunting’ his country: ‘Tragedy has crossed the seas/ Syria implores its displaced children to return.’

Dreaming, like so many others, of reaching Germany, Ahmad made his way to Macedonia, then Serbia, and was on his way to Zagreb Saturday night ‘if they let me in.’

‘It has been non-stop,’ he told AFP. ‘I haven’t slept for the past three days; I am exhausted. I hope I will reach my destination soon.’

‘I would love to play in the most famous orchestras, touring around the world and conveying the suffering of those that are besieged in (Yarmouk) and of all the civilians still in Syria.’ 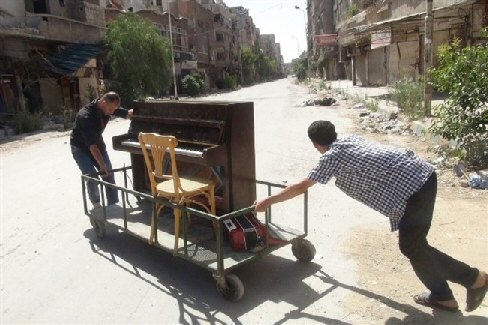