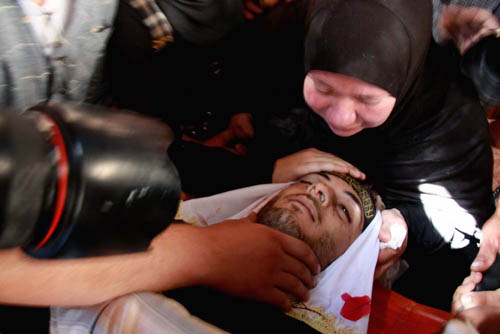 She planted three kisses on his forehead, and held him so tight, as this would be the last time she would be able to see him or hold him, hoping that his smell would attach to her dress – her tears filling her eyes, as she bid her son farewell for the last time.

The mother held her son’s hand, while holding the hand of her daughter, hoping to strengthen her determination, and ease her unbearable pain and agony.

Her other daughters were also there, standing by her side, faces covered with tears, and voices unable to utter a single word. They were there…hoping he would wake up, and be among them once again…

Their home was filled with people, the entire neighborhood overcrowded with Palestinians who rushed to the family’s home, hoping to bid one last farewell to this young man, who was shot, dragged and killed by Israeli soldiers claiming he assaulted them.

Dia’ Abdul-Halim Mahmoud Talahma, 21, from Kharsa town, near Doura, in the southern West Bank district of Hebron, left this life early, not by choice, or a disease, but because the Israeli army ended it.

Thousands of Palestinians rushed to his village, to his neighborhood and home, and held a massive funeral procession, in the streets and alleys, until they reached the local graveyard to bury his body.

‘My son is a martyr; despite my grief, my ongoing pain and suffering, I am proud of him,’ she said, ‘We raise our heads high knowing he left this world defending Palestine and the Al-Aqsa Mosque.’

‘I never imagined this would be the last day I would see my son alive, standing on his two feet; he left our home in the morning, like any other day, heading to his college where he is studying to become a computer engineer – after school he went to work, then came back in the evening to eat dinner before he went to the gym.’

‘We heard what sounded like an explosion, and gunshots. Then social media pages were talking about a martyr, killed in the Kharsa junction area,’ she added, ‘I just knew; I felt it deep in my heart. It was my son.’

‘He was a wonderful young man, always smiling, loved and respected by all,’ the mother said, ‘He respected everybody, the elderly as well as the young… he just treated everybody with respect.’

His sister, Wafa’, said she received a call from her family, telling her a person was killed by the Israeli army, and it is very likely this person was her brother.

She rushed home to find it surrounded by soldiers, and that is when she realized it was her brother who had been killed.

Weeping and breathless, the sister said, ‘My kindhearted brother has left us. Every feast, my children and I would wait for him to visit us; his laughs and kind spirit were our feast, and joy, but now he is gone, and so is our joy; he was the most compassionate brother and friend.’

His father, Abdul-Halim Talahma, was repeatedly kidnapped and imprisoned by Israel, and one of his sons was kidnapped by the army two and a half years ago, and is still in prison.

‘What happened to us is a testimony to the entire world, exposing the Israeli crimes; they never differentiate between a fighter and an unarmed civilian; they just do not care. Every Palestinian is a legitimate target to them’, Talahma, the mother of the deceased, stated, ‘The soldiers killed my son in a cold-blooded crime, and then they even prevented the medics from reaching him for three full hours.’

Dia’ was killed on Tuesday at dawn, September 22, and on that same fateful day, a young woman, identified as Hadeel Salaheddin Hashlamoun, 18 years of age, was shot dead by Israeli soldiers at a roadblock on Shuhada Street, in Hebron.

The first-year college student had the whole world in front of her, but the soldiers shot her in the abdomen and legs, and left her to bleed for 30 minutes after preventing local Red Crescent medics from reaching her.

Later, an Israeli ambulance took her to a hospital in Jerusalem, but she died of her serious wounds in the evening of the same day.

The Israeli army claimed she attacked soldiers on the roadblock, but eyewitness testimonies, and pictures, captured prior and after the shooting, showing a soldier pointing his gun at her and then showing her body on the ground, refuting the military allegations.