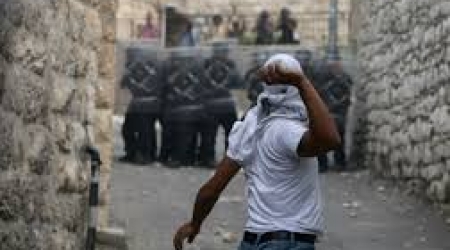 The approval of authorizing the use of live fire against stone-throwers in occupied East Jerusalem, rather than restoring order to the city, would exacerbate the cycle of violence with lethal results, B’Tselem reported.In a report published on Monday, B’Tselem expected that Attorney General Yehuda Weinstein’s approval would not have the result desired by the Israeli government. It said it contravenes recommendations made by the Or Commission, established to investigate the killing of Palestinians by Israeli security forces in the Fall of 2000.

According to Al Ray Palestinian Media Agency, Israeli Prime Minister Benjamin Netanyahu has asked Weinstein to authorize the use of live fire against stone-throwers in East Jerusalem. It is meant to allow local Israeli police forces to fire live .22 caliber bullets at Palestinian stone-throwers. These bullets, also known as Two-Twos or Ruger rifle bullets, have a lesser impact than “ordinary” live bullets, but may still be fatal or cause serious injury. (The bullet fired by a US military M16 rifle is roughly the same size.)

Or Commission recommendations stated that the police cannot use live fire, including sniper fire, to disperse crowds. Live ammunition is reserved for special situations. The guiding principle must be that a potentially lethal measure can only be used in situations of clear and immediate mortal danger.
Since the beginning of the year, Israeli security forces in the West Bank have killed three Palestinians using Two-Two bullets, during stone-throwing incidents in which members of the Israeli security forces were not in mortal danger. Four more Palestinians, two of them minors, were killed by “ordinary” live ammunition shot by security forces in similar incidents. These are seven of 20 Palestinians killed by security forces in the West Bank since the beginning of the year. Dozens of Palestinians have been injured by live fire during clashes of this kind, some of them sustaining very serious injuries.

B’Tselem explained that the restrictions placed on using lethal weapons become eroded over time, and the result is a constant expansion of the Two-Two use. It said that, currently, snipers routinely fire Two-Two bullets at Palestinians in many flashpoint areas of the occupied West Bank, in circumstances that are far removed from those in which the open-fire regulations permit the use of live ammunition.
It noted that Israeli forces on the ground do not follow the restrictions on using lethal ammunition at stone-throwers. It added that snipers also sometimes fire at body parts which are prohibited by the regulations, increasing the risk of a fatality.

B’Tselem has warned for year that the way the military uses Two-Two bullets on the ground. In addition, statements made by Israeli military spokespersons and border police officers contradict official statements made by the Military Advocate General Crops that the orders governing the use of Two-Two bullets are extremely restrictive. The message soldiers on the ground actually receive from the military is that Two-Twos are not a dangerous, lethal weapon, but just another crowd control tool. This message defies the law and puts lives at risk.

Israeli media reported that the Israeli Cabinet has approved a police plan that includes the use of assault dogs and collective punishment against East Jerusalem residents, in an official bid to put pressure on them to restrain people from taking part in the clashes.

B’Tselem said that ,the approach which has been taken, is unlawful and immoral. It ignores the deep seated discrimination in occupied East Jerusalem and the daily violations of the human rights of Palestinians, while using increasingly violent measures against them.