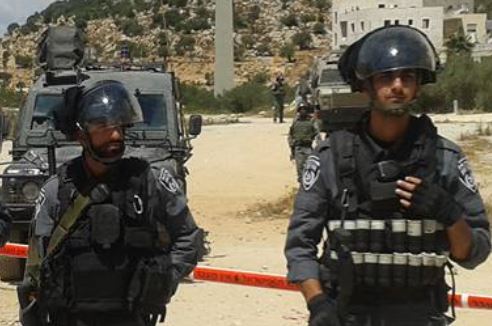 The children were held, and interrogated, for several hours, before the soldiers released them.

In addition, soldiers invaded the al-Borj village, south of Hebron, broke into and searched several homes, and withdrew later without conducting any arrests.

Coordinator of the Popular Committee against the Wall and Settlements in Beit Ummar town, north of Hebron, Mohammad Ayyad Awad, said dozens of soldiers invaded al-‘Ein and Aseeda areas, and photographed dozens of homes and stores, especially on both sides of the main road extending from al-‘Ein Junction to the al-Arba’in Park.

Earlier Tuesday, soldiers shot and injured a young Palestinian woman, 18 years of age, while crossing an Israeli military roadblock, on the main entrance of the Shuhada Street, in the center of Hebron.

On Tuesday at dawn, the soldiers invaded the northern West Bank city of Nablus, and clashed with local youths, wounding three, and kidnapped another Palestinian.

The army also shot and killed a young Palestinian man, near the Kharsa Junction, south of Doura, in the southern West Bank district of Hebron.