Leg Of Detained Wounded Child To Be Amputated 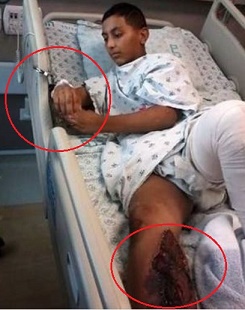 The Palestinian Detainees’ Committee has reported, Wednesday, that surgeons in the Hadassah Ein Karem Israeli Hospital, in occupied Jerusalem, have decided to amputate the leg of a wounded, and detained, Palestinian child.Lawyer Tareq Barghouth of the Detainees’ Committee said that, despite the child’s gunshot wound in his right leg, he remain shackled to his hospital bed.

He added that the child, Issa Adnan Abdul-Mo’ty, 13 years of age, was shot with an Israeli dumdum bullet, that expands upon impact, at the northern entrance of the West Bank city of Bethlehem.

He is currently hospitalized at the Hadassah Israeli Medical Center, in Jerusalem.

Barghouth further stated that, although the ‘Ofer Israeli military court has decided to release the child on a 7000 New Israeli Shekels bail, on September 29, the military prosecutor filed an appeal to block the release despite his serious injury.

The head of the Detainees’ Committee Issa Qaraqe said the child is one of the latest victims of Israel’s illegal, immoral and racist policies against the children, especially the recent official approval for the use of sniper fire against Palestinian protesters in Jerusalem.

‘What happened to this child is a premeditated crime, and a serious tragedy,’ he said, “Israel must pay the price for its crimes – must be held accountable in international courts.”