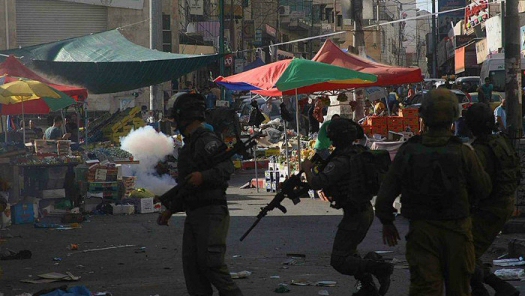 Tens of Palestinians were wounded in clashes with Israeli soldiers Tuesday in protests against Israel’s attacks on al Aqsa and in solidarity with hunger striking prisoners.The Palestinian political and Islamic parties issued a shared statement Monday night, calling on Palestinians to demonstrate throughout the West Bank. The interesting new twist in this statement was the call to demonstrate in contact areas with Israeli soldiers, including near checkpoints and the entrances to cities.

A general strike was further called for Tuesday afternoon.

In Ramallah hundreds of Palestinians clashed with Israeli soldiers at the northern entrance to the city, where an Israeli checkpoint adjacent to the Beit El settlement is located. Soldiers shot live and rubber-coated steel bullets, injuring 18. Israeli soldiers further invaded the northern area of Ramallah, designated as Area A and ostensibly under full security control of the Palestinian Authority (PA).

Some 100 Palestinians demonstrated in the northern entrance to Bethlehem, clashing with soldiers. Seven were wounded by rubber-coated steel bullets, and soldiers closed this entrance to the city.

Ten Palestinians were wounded by rubber-coated steel bullets in the Bab el Zaweya area of Hebron, the separation zone between the Israeli-controlled downtown area and the west side of Hebron, under PA control. Dozens of others were overcome from the effects of tear gas. Israeli soldiers shut down much of this area, preventing local residents from moving.

Demonstrators in Bethlehem and Ramallah called on the Palestinian Authority to stop its coordination with Israel, particularly on the security level.

Numerous commentators noted how these demonstrators remind them of the first and second Palestinian intifadas. Monday night’s statement by the political and Islamic parties is the first time in a long while that the parties issued a joint call for action against the occupation. This is reminiscent of 1987, when parties worked together during the first intifada. Secondly, the call for demonstrators to protest in contact areas is reminiscent of the beginning of the second Intifada, when the spark began from Jerusalem’s al Aqsa mosque and demonstrations erupted in the contact zones throughout the West Bank.