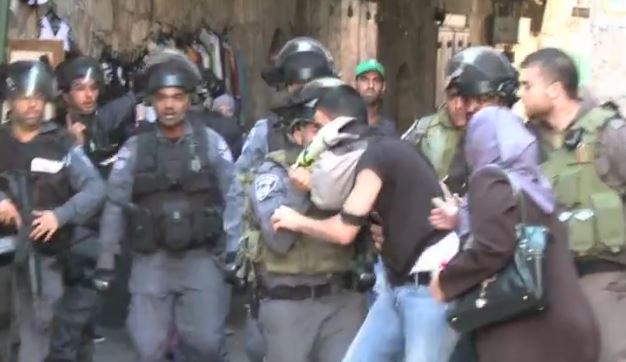 It added that the soldiers also kidnapped 56 Palestinians from the besieged and improvised Gaza Strip; 40 of them are fishers who were attacked in Palestinian waters, and 16 were kidnapped while crossing the Erez Terminal, on their way to the West Bank.

The soldiers also kidnapped 75 Palestinians in the Hebron district, 38 in Ramallah al-Biereh, 32 in Bethlehem, 22 in Jenin, 20 in Nablus, eight in Tulkarem, six in Jericho, five in Tubas, four in Qalqilia and two in Salfit.

In addition, the PPS said that the army is still holding captive nearly 230 Palestinian children, while denying them basic rights, guaranteed by International Law and the Fourth Geneva Convention, and subjected to physical and psychological torture.

The detained children face high fines, denied the right to family visits, and are largely denied access to legal representation.

The children are also attacked and beaten during their arrest, while some of them were shot and injured.

One of them is Issa Adnan Abdul-Mo’ty, 13 years of age, who was shot with a dumdum live round that detonates upon impact, and Israeli doctors have decided to amputate his severely damaged leg.

It took the army more than an hour to move the wounded child to the hospital despite his serious injury, and after transferring him there, he was cuffed and shackled to his bed.

The PPS stated that Israel is still holding captive 25 women, 15 of them were taken prisoner in September, including twelve from occupied Jerusalem.

One of the imprisoned women is Amal Taqatqa, who was injured after the soldiers attacked her during her abduction, while the Prison Authority is refusing to hospitalize her.