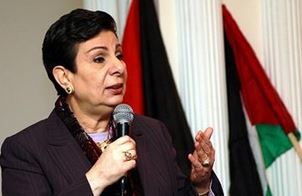 Member of the Executive Committee of the Palestine Liberation Organization (PLO), Dr. Hanan Ashrawi, stated Friday that the UN speech of Israeli Prime Minister Benjamin Netanyahu, is deceptive, manipulative, and based on lies. In a press release, Dr. Ashrawi said Netanyahu’s attempts to present Israel as the victim, and casting the blame solely on the Palestinians, only shows his bankrupt social, moral, and legal policies.

“He is trying to present Israel as a country that fights against terrorism, and defends world nations, while this country still occupies and oppresses an entire population,” she stated, “The Palestinians continue to live under occupation, facing ongoing crimes and violations.”

The Palestinian official added that Netanyahu’s speech focused on the Iranian file, and his criticism of the international agreement that prevented war with Iran.

She added that Netanyahu continues to insist on an official Palestinian recognition of Israel as a Jewish State, and insists on policies that would only lead to more violence, and sectarian conflicts.

“This speech shows Israel’s arrogant policies, demanding sanctions on Iran, war with the country, while maintaining that his country’s nuclear agenda remains away from any international inspection,” Dr. Ashrawi stated, “Israel continues its violence and terrorism against the Palestinians, dragging the entire area into a religious war by escalating attacks against holy sites, especially the Al-Aqsa Mosque.”

She added that Netanyahu extended a farce invitation to President Mahmoud Abbas to resume direct peace talk, without preconditions, while at the same time continues to demand an official recognition of Israel as a Jewish State, in addition to an unarmed, fragmented, Palestinian state, without even recognizing any of the legitimate, internationally guaranteed, Palestinian rights of liberation and independence.

“His polices have voided the political process, and are creating facts on the ground,” Dr. Ashrawi said, “He still continues to build and expand the illegal colonies in occupied Palestine, continues the theft of land and natural resources, to prevent any chances of establishing a contiguous, independent Palestinian State.”

She also stated that, as far as Netanyahu is concerned, respecting and abiding by International Law, and all signed peace agreements, are preconditions, instead of basic requirements to a comprehensive and a just peace agreement.

‘The main cause of terrorism and extremism in the region is this ongoing occupation, and its illegal policies,’ Dr. Ashrawi concluded, ‘The time has come to end this occupation, achieve the Palestinian rights, provide them with the needed international protection, and to hold Israel accountable for its crimes.”