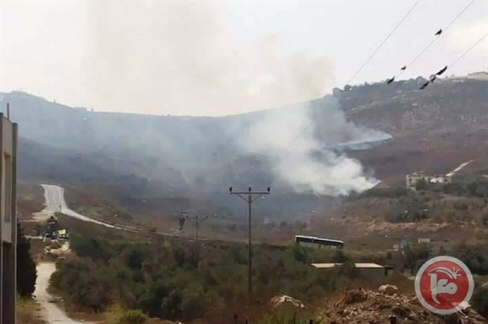 Israeli settlers set fire to dozens of olive trees on Palestinian agricultural land near the Nablus village of Burin, on Friday, as tensions remain high in the occupied West Bank following the killing of two settlers and reprisal attacks on Palestinian villages.

A Burin village committee member told Ma’an News Agency that a large group of settlers torched dozens of olive trees on land belonging to Um Ayman Sufian and attempted to set fire to her home.

A local guard committee set up by villagers to ward off attacks managed to prevent the settlers from burning the house.

Mahmoud Musleh, director of public relations in the Palestinian Civil Defense, said that firemen managed to extinguish the fire before it reached other homes in the village.

In the nearby town of Huwwara, settlers set fire to dozens of dunams of agricultural land, a spokesperson from Fatah said. Awad Najm said firefighters were en route to the scene.
Hundreds of Israeli settlers rioted across the occupied West Bank late Thursday, with multiple attacks reported on Palestinian homes and vehicles in the aftermath of the shooting of two Israeli settlers.

Eitam and Naama Henkin, both in their 30s, were shot while driving on Thursday night between the illegal settlements of Itamar and Elon More.

Their four children, aged between four months and nine years, were found unharmed in the back of the car.

Improving ‘security for all Israeli citizens’

The Nablus area was on virtual lock-down overnight and hundreds of Israeli troops were searching for suspected Palestinian gunmen on Friday following the shooting.

Palestinians across the West Bank are readying to protect their towns and villages as reports of settlers gathering to seek revenge for the shooting continue.

In Huwwara, 200 settlers reportedly attempted to raid the town under the protection of Israeli soldiers Thursday night, while Palestinians used speakers from a mosque to mobilize villagers to resist the incursion.

The Palestinian government has no jurisdiction over Israelis in the West Bank, and violent acts carried out by Israeli settlers often occur in the presence of Israeli military forces who rarely act to protect Palestinian residents.

Palestinians are therefore left to fend for themselves as few options for their personal security remain.

Such practices, they say, protect the expansion of settlements while systematically removing the ability for Palestinians to move freely throughout the occupied territory.

In a speech at the funeral of the parents slain Thursday, Israeli president Reuven Rivlin reiterated Israel’s sovereignty over the West Bank and said that settlement construction would continue.