Israeli Forces Escalate Restrictions and Violence Against Palestinians During Sukkot 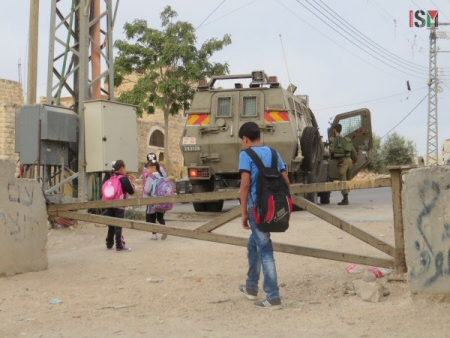 Monday, Tuesday and Wednesday, the 28th – 30th September 2015 is the Jewish holiday of Sukkot. In the occupied West Bank city of al-Khalil (Hebron), while Israeli settlers from the many illegal settlements within al-Khalil celebrate their holiday, Israeli forces have escalated restrictions and violence against the Palestinian residents, further infringing on their most basic rights.

In preparation for the celebrations of Sukkot, already heavily restricted Palestinian freedom of movement has been almost entirely grinded to a halt by Israeli forces. Especially in the area around the Ibrahimi mosque, food-stalls and entertainment has sprung up for settlers not only from al-Khalil but also visiting from other West Bank illegal settlements. In order to completely barr Palestinians from this main venue of celebration for the settlers and Israeli forces, the mosque checkpoint leading to this area from the Palestinian market has been closed down for two days. Shopkeepers were handed notices by the Israeli army forcing them to again close their shops for the Jewish holiday, imposing more days of forced closures and lost income.

But in most of the cases, that was not the case, with huge groups of settlers flooding into al-Khalil, Israeli forces did everything possible to facilitate their movement. New checkpoints and road-blocks popped up randomly, leaving Palestinians with their cars parked on the wrong side of them without any possibility to access their cars, soldiers took over several Palestinian houses, using their roofs or even the whole house as a military base to ‘keep an eye’ on Palestinians’ every movement in the maze of obstacles, dead-ends and military checkpoints – almost impossible to navigate in every-day life in a militarily occupied city – further exacerbated by this holiday.

Even in the H1-area of al-Khalil, that is supposedly under full Palestinian control, Israeli forces evicted Palestinian civilians going about their everyday lives attacking them with stun-grenades and rubber coated steel bullets, to facilitate access exclusively for Israeli settlers. Sudden attacks like these didn’t allow even for a few minutes for shopkeepers and vendors to protect their produce from violent assaults by Israeli forces or for families and mothers to hurriedly whisk their small children to safety out of the range of indiscriminate fire. In the area around Bab al-Zawwiyya and Shuhada checkpoint, where Palestinian student Hadeel al-Hashlamoun was ruthlessly gunned down and killed by Israeli soldiers just last week, endless rounds of stun-grenades and rubber coated steel bullets fired at protectors have echoed throughout the days. Israeli forces’ fire has also been directly targeting Palestinian families, with tear gas and stun grenades continuously exploding on the roofs of their homes, leaving them scared and hurriedly closing windows to minimise tear gas slowly seeping into their homes.

In this escalation of violence, harassment, attacks and restrictions, it doesn’t matter if you’re a small child, a grown up adult or an old person. The stepped up ‘security’ is only imposing further hassles and obstacles on Palestinians’ already severely restricted everyday life. Israeli settlers on the other hand, under the watch of the Israeli forces are free to attack Palestinian families and shops or keep them locked up in their home by blocking their front door. And age doesn’t matter in these cases either, while some of the settlers use their children to block international observers’ cameras, other parents encourage them to join the attacks and insults on Palestinian families. Soldiers idly standing by watching these incidents happen, just a few minutes afterwards, receive pizza delivered by the same settlers or giving them a hug on their way home after their shift is finished.
For Palestinians, every day life is children coming home from school crying, coughing and choking from tear gas shot at them by Israeli forces at one of the many checkpoints they have to cross, passing heavily armed military. Every day life is mothers and fathers anxiously waiting for the return of their children from school if they’re late, hoping and praying they were not randomly snatched by Israeli forces and arrested for ‘dirty hands’ that would indicate they were throwing stones – just because children would never play and get dirty hands. Every day life is families having to endure Israeli settlers attacking a son, brother or father with Israeli forces standing by not intervening and later on arresting the person attacked. 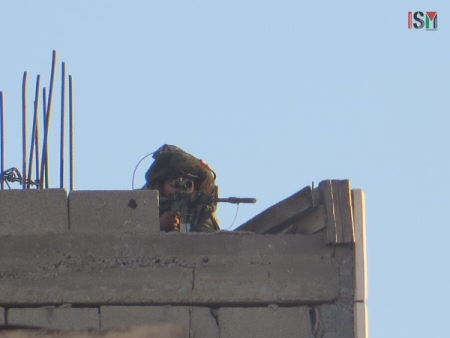