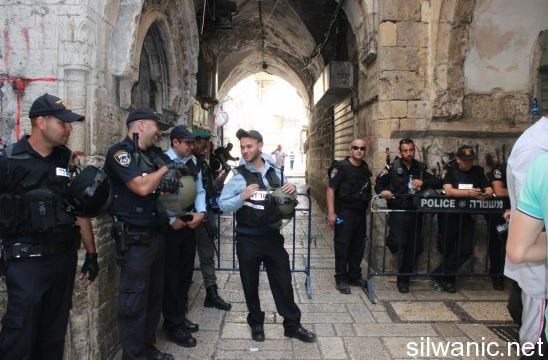 Medical sources have reported that more than 160 Palestinians were injured by Israeli army fire, Sunday, during clashes in various parts of occupied East Jerusalem.The Palestinian Red Crescent Society in Jerusalem said one of the wounded suffered a very serious injury, before an Israeli ambulance took him to Hadassah Ein Karem Medical Center.

On Sunday at night, a young Palestinian man was shot with a live round in the leg, during clashes that took place in the al-‘Isawiyya town, northeast of Jerusalem.

The army claims the Palestinian carried a Molotov cocktail, during clashes. Al-‘Isawiyya is the hometown of Fadi ‘Alloun, 19, who was shot and killed at dawn, Sunday.

Medical sources in occupied Jerusalem said, among the 160 wounded Palestinians, are many residents who were shot with live rounds, while dozens were shot with rubber-coated steel bullets, and many suffered the effect of tear gas inhalation.

At least one Palestinian suffered a gunshot injury, while several others were shot with rubber-coated metal bullets, and dozen suffered the effects of tear gas inhalation, during clashes near the Qalandia Terminal, north of Jerusalem.

Clashes also took place in the Sa’diyya neighborhood, the Shu’fat town, north of Jerusalem, leading to dozens of injuries, including several by live army fire.

Four more Palestinians were shot with rubber-coated steel bullets in at-Tour, and were moved to local clinics.

In addition, a number of Israeli extremists attacked a home, belonging to Ibrahim ‘Oleyyan, in Beit Safa town, in Jerusalem.

Earlier Sunday, ten residents were injured by rubber-coated steel bullets, and dozens suffered the effects of tear gas inhalation, during clashes that took place after the army invaded the al-‘Isawiyya town, northeast of occupied Jerusalem.

On Sunday at night, a Palestinian teen identified as Hotheifa Othman Suleiman, 18 years of age, died of a serious injury he suffered earlier when Israeli soldiers shot him in the abdomen, during clashes that took place near the Nitzani roadblock, west of the northern West Bank city of Tulkarem.

On Sunday at dawn, Fadi Samir Alloun, 19 years of age, was shot and killed by Israeli police fire, in Jerusalem.

It is worth mentioning that the Israeli authorities have issued a 48-hour ban on Palestinians from entering the Old City in occupied East Jerusalem, following two stabbing attacks in which two Israelis were killed and three injured at the site.