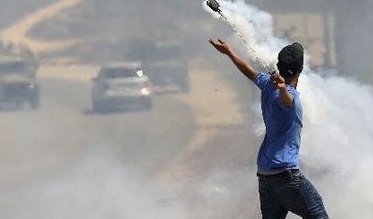 On Sunday at night, a Palestinian was shot with an Israeli army gas bomb in the face, near Doura town, in the southern West Bank city of Hebron, while many suffered the effects of tear gas inhalation. A young man and a child were injured after Israeli extremists assaulted them.Medical sources said a young man was shot in the face with an Israeli gas bomb, fired by Israeli soldiers during clashes with scores of Palestinians at the Kharsa village junction, south of Hebron.

Clashes also took place in the northern and eastern parts of Yatta town, causing many Palestinians to suffer the effects of tear gas inhalation.

In related news, Israeli extremists attacked, earlier on Monday, a Palestinian child and a young man, in Hebron’s Old City.

The child, Adham Mosallam, 13 years of age, and Mohammad Tarayra, 24, suffered various cuts and bruises, and were hospitalized.

The soldiers closed the Halhoul Bridge, north of Hebron, and prevented the Palestinians from crossing.

The army also detained Khaled Abu Morr, from Hahoul town, after stopping his car on Road #30, north of Hebron, cuffed and blindfolded him for an hour, and released him.

On Sunday, more than 160 Palestinians were injured by Israeli army fire, during clashes in various parts of occupied East Jerusalem, and that one of the wounded suffered a serious injury.

On Sunday at night, a Palestinian teen identified as Hotheifa Othman Suleiman, 18 years of age, died of a serious injury he suffered earlier when Israeli soldiers shot him in the abdomen, during clashes that took place near the Nitzani roadblock, west of the northern West Bank city of Tulkarem.