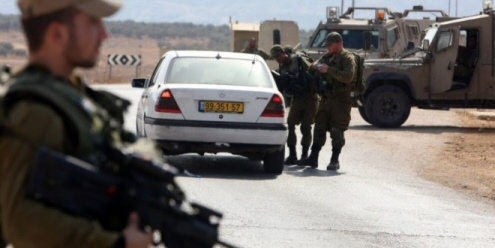 On Monday night, Israeli forces arrested five alleged Hamas members over the shooting of a settler couple in the West Bank city of Nablus, as the Israeli Prime Minister Benjamin Netanyahu pledged an “iron fist” against them. As IOF announced the kidnapping of the alleged Hamas members over last week’s shooting of the settler couple near the Israeli settlement of Etimar and Yetzhar, Netanyahu said that “no attackers were beyond reach,” AFP reported.

“We are not prepared to give immunity to anybody, not to any rioter… or any ‘terrorist’, anywhere, and therefore there are no limits on the activities of the security forces,” he said ahead of a special session of his security cabinet.

A joint statement by the Israeli police, army and Shin Bet domestic security agency said, according to PNN’s report, that the five men arrested were members of militant group Hamas and had confessed to shooting the Israeli couple in their car in the West Bank.

AFP said that Netanyahu is under pressure from right-wingers in his governing coalition because he is not doing enough to curb Palestinian resistance.

During the night, witnesses said Israeli security forces were preparing to demolish the houses of at least three suspected attackers in Jerusalem.

Israeli soldiers surrounded the family home of Muataz Hijazi, a Palestinian who was shot dead by police after an alleged suspected attempt to kill controversial Israeli rabbi Yehuda Glick, in the al-Thori district of east Jerusalem, amateur videos showed.

An AFP reporter on the scene said the area had been closed off and helicopters were flying overhead.

Witnesses said other houses were encircled in Jabel Mukaber, another neighbourhood in annexed east Jerusalem.