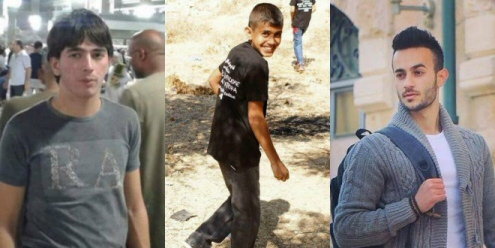 On October 5th, Aida Refugee camp lost another of its children to Israel’s occupation.Abd al-Rahman Shadi; a child of just 13 years, and a Palestinian refugee, was shot and killed by an Israeli sniper in Aida Refugee Camp, Bethlehem. Abd al-Rahman was shot as he stood beneath the flag of the United Nations, a meter from the UNRWA office at the entrance of Aida Camp.

Abd al-Rahman is the seventh child of Aida Camp to have been killed by Israeli occupying forces since its encirclement by the illegal Annexation Wall in 2005. Many others have received non-fatal gunshot wounds whilst, in the same time period, more than 80 children of Aida Camp have been arrested by the Israeli military, typically during violent night-time home invasions.

Abd al-Rahman was shot and killed whilst returning home after a day at school. He was taken to the hospital still wearing his backpack. Targeted by an Israeli sniper, he was shot in the chest with live ammunition whilst standing among a group of children in front of UNRWA office. The distance between the office and the Israeli military base from which Abd al-Raham was targeted is in excess of 100 meters. As such, there can be no reasonable contention that Abd al-Raham posed any form of threat to Israeli soldiers, and his death represents the latest tragedy in an endless record of unlawful Palestinian bloodshed at the hands of the Israeli occupying power.

Israel’s use of lethal weaponry against Palestinian civilians in so-called ‘crowd control’ scenarios inside the occupied Palestinian territory is well-established, and was addressed by the Independent Commission of Inquiry on Gaza 2014, which stated its concern at “the regular resort by [Israeli forces] to live ammunition, including in situations where there is no direct or imminent threat to [Israeli forces] or other individuals. The use of live bullets inevitably raises the likelihood of death or serious injury.” In this light, tragedies such as the killing of Abd al-Raham cannot be seen as exceptions, but rather as the natural and intended result of discriminatory Israeli policy. This policy – and the killing of Palestinian children – will continue for as long as accountability for such crimes is absent.

– The Palestinian Authority/Palestinian Liberation Organization to investigate the unlawful killing of Abd al-Rahman, and to submit his case to the International Criminal Court; The international community to fulfill its commitment toward Palestinian people, particularly in affording refugees the full protection to which they are entitled.